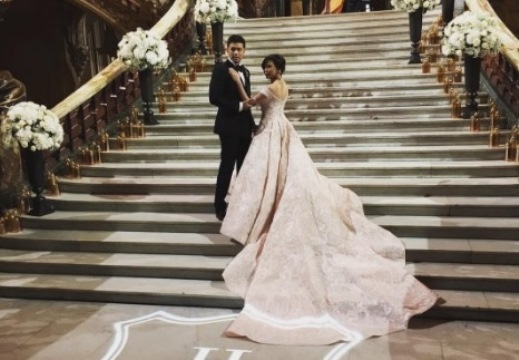 Scarlet Snow, the star-studded guest list, and the fabulous gowns!

(SPOT.ph) Congratulations are in order for Vicki Belo and Hayden Kho, who tied the knot on September 2, in what is arguably the biggest and most grandiose celebrity wedding of the year. The star-studded affair took place at the The American Church in Paris, France.

Before the actual wedding, guests were invited on a cruise:

Host Tim Yap with the couple and their daughter Scarlet Snow

After the cruise, she proceeded to get ready, with the help of Juan Sarte and Junar Santos

From the jaw-dropping gowns by Michael Cinco to the epic guest list, we round up some of the biggest highlights of the nuptials, starting with, of course, their ridiculously adorable daughter Scarlet Snow, who was flower girl:

It was a couture, blush-colored wedding dress with a three-meter long train made of French lace and fully-embroidered baroque pattern with transparent and rose opal Swarovski crystals

During the reception at Opera Garnier, she also changed into a third dress

The guest list, which mostly composed of some of the biggest stars in showbiz, included:

Lucy and Tessa, this time with Ben Chan

The Dantes family with Tim Yap. They're excited it's finally happening!

Vicki with her kids, Cristale and Quark

The It Girls with the blushing bride

I'm bumping all the others for this one !!!!!! @aldenrichards02 #aKHOandmyBELOved

Here is their first public appearance as a married couple:

And of course, their first kiss: