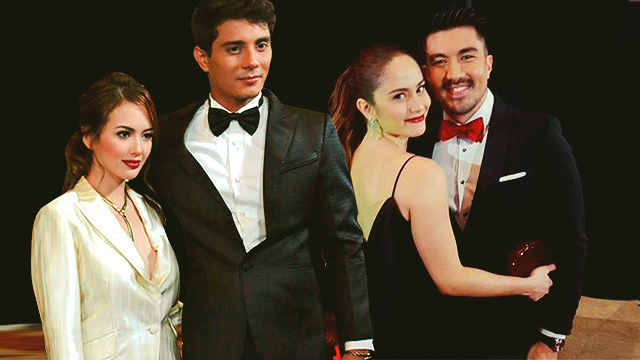 The Most Controversial Moments in Star Magic Ball History

The brightest night in showbiz had some pretty juicy moments over the years.

(SPOT.ph) Dating all the way back to 2006, the Star Magic Ball has played host to some of the biggest and brightest stars of the 25-year-old talent agency, where real (and reel) couples walk the red carpet in head-turning ensembles. But as with any star-studded event filled with glitz and glamour, the annual tradition has also been witness to some pretty dramatic, headline-making controversies.

We look back at some of the most talked-about moments from Star Magic Ball over the years.

This highly publicized fight in 2011 didn’t actually happen during the ball; instead, the public altercation went down at the after-party venue. At the time, both Maja Salvador and Matteo Guidicelli were a rumored item, though they had yet to officially go public about it. Onscreen, she was paired with Coco Martin for the series Minsan Lang Kita Iibigin. Matteo admitted that his jealousy began when both Coco and Maja were at a mall show and the Ang Probinsyano actor had reportedly “stolen kisses” from her during the event. Matteo confronted him at Star Magic Ball, which led to a fist-fight. He and Maja amicably split in 2012, and both actors have since apologized.

It was tough to be Jessy Mendiola in 2016. Although she was declared as FHM’s “Sexiest Woman” of the year, many were more than vocal about their displeasure. She was also rumored to have caused the breakup between Angel Locsin and Luis Manzano, so it’s safe to say that she’s had more than her fair share of bashers.

Naturally, critics had a field day during Star Magic Ball that same year when Jessy was being interviewed on the red carpet alongside her then-rumored boyfriend. After the latter said he was “claiming that [he has] the most beautiful date this evening,” she replied, “What am I say to that?”

In 2010, the Kimerald tandem was going stronger than ever, though their real-life relationship was rumored to be anything but. Although Kim Chiu and Gerald Anderson attended the ball together, the latter was spotted holding hands and leaving the event with Bea Alonzo. At the time, they both claimed there was nothing going on between them but in a 2013 interview with YES! Magazine, Bea admitted a short-lived relationship with Gerald—after he had broken things off with Kim.

After their “short fling,” she went on to date Zanjoe Marudo for five years. Gerald, on the other hand, dated Kim’s close friend, Maja Salvador—which led to a very awkward, public fall-out. Fast-forward to 2017, and Gerald and Bea are back together, though they have yet to directly address the rumors.

A party is always a good excuse to get buzzed: Just ask Ellen Adarna. She made headlines in 2015 when she attended the event with her Pasion de Amor co-star Ejay Falcon (who was reportedly courting her at the time), but according to a report from TV Patrol, the actress got drunk then ditched her date on the dance floor. She was later seen holding hands with Paulo Avelino throughout the night.

Despite all the drama, Ejay still took to Instagram to defend his onscreen partner, saying, “I wouldn’t change a thing.” Ellen, on the other hand, admitted she was drunk but denied abandoning her date.

Kristel Moreno and Her See-Through Gown

In 2014, former SexBomb Girls member Kristel Moreno was heavily criticized online after she wore a see-through, “no underwear” gown that landed her on many “Worst Dressed” lists. Some people commented on her weight and the “unflattering” dress, while others said she disrespected the event. She apologized for the dress and explained that it was designed by Hollywood-based Filipino designer, Rocky Gathercole, who previously dressed the likes of Katy Perry and Jennifer Lopez.

That same year, TV host Billy Crawford also had everyone talking when he was detained at a Taguig City police station hours after the Star Magic Ball. According to reports, a drunken Billy went to the station to complain about a personal problem. He caused a scene when police tried to calm him down, breaking one of the precinct’s sliding doors. Billy later apologized for the incident, though he didn’t divulge the reason behind his visit to the station, saying, “I’m stressed out by certain situations.”

Piolo Pascual and Shaina Magdayao Heat Up the Dance Floor

One of the biggest headliners from 2016’s Star Magic Ball—you know, aside from Liza Soberano’s scene-stealing gown—was Piolo Pascual and Shaina Magdayao’s “intimate” dance. They immediately sparked dating rumors, which Shaina downplayed, saying, “I had fun with all my friends in the business.”

In February 2017, Piolo confessed that he and Shaina had been “exclusively dating” for the past five years—which she downplayed again, saying, “Just for the record, he is free to date anyone he wants, the same way I’m free to date anyone I want.” The two were first romantically linked in 2012 and they reportedly split in 2014.

Showbiz Nostalgia Controversy Pinoy Showbiz Star Magic Ball Star Magic
Your Guide to Thriving in This Strange New World
Staying
In? What to watch, what to eat, and where to shop from home
OR
Heading
Out? What you need to know to stay safe when heading out