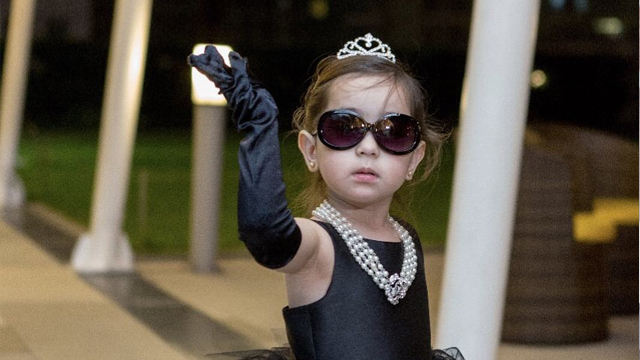 Have you seen her Breakfast at Tiffany's ensemble yet?

(SPOT.ph) Halloween is coming up and for kids, it can only mean one thing—trick or treating in their favorite costumes. Celebrities are dressing up their kids in the cutest outfits and one kid who loves to dress up is Dr. Vicki Belo-Kho and Dr. Hayden Kho’s very own Scarlet Snow.

Here are just some of her candid snaps while in character:

Scarlet Snow went shopping in style. She channeled her inner Holly Golightly, the fashionable character played by Audrey Hepburn in Breakfast at Tiffany’s.

Scarlet Snow said the dress was a bit heavy but doesn’t she look so regal as Belle in Beauty and the Beast? And look! She even has a magical rose!

Here is Scarlet Snow practicing her swish and flick. She’s a bit too young to attend Hogwarts but with that outfit, she can give Harry and his friends a run for their money.

Scarlet is even more adorable with bunny ears!

In this photo taken in January, Scarlet Snow looks ready to ride with the horses. Her older sister Cristalle actually owns horses and ponies which she lends Scarlet Snow from time to time.

When UN day came rolling along, Scarlet Snow dressed up in this embroidered gown. She even said that while her mom wants her to follow in her footsteps as a dermatologist, her dad wants her to become Head of the United Nations.

With Scarlet Snow promoting causes like the environment and helping kids in , we can definitely say that she’s a little angel.

Dressed up as another Disney princess, Scarlet Snow is fittingly dressed up as Snow White. With her black hair, snow white skin, and her name, she can really pass for a princess.

Woof! Woof! Her love for animal ears shows in another photo. This time, she looks like an adorable dalmatian, much like those social filters she also likes to use very much.

Here is Scarlet Snow dressed up as a good little elf, ready to be Santa’s little helper.