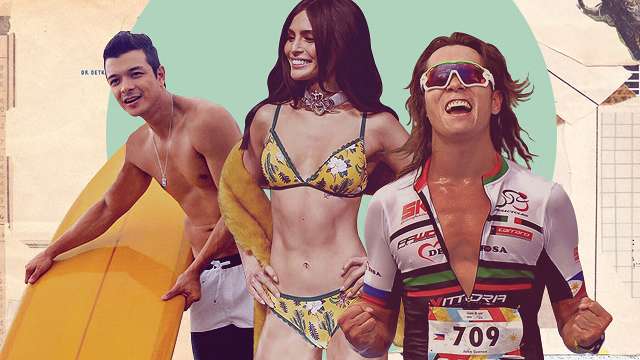 10 Local Celebrities for Your Fitspiration

One look and you'll want to hit the gym!

(SPOT.ph) You can’t scroll through your Instagram feed without coming across photos of your fave celebrities rocking their beach bod while on vacation. And while you automatically give them that double-tap, you can’t help but mentally make plans to hit the gym so you can also get your own washboard abs and toned arms. We round up 10 local celebrities who'll inspire you to start on that healthier, more active lifestyle.

We’ve all seen Lovi Poe’s rock-hard abs. She works out so often, she even has a hashtag for her workout adventures: #LoviYourBody. You’ll see her posts at the gym, with side-planks and weights incorporated in her strict routines. She also hits the workout machines and even finds the time to work out while traveling! If that’s not a fitness goal, we don’t know what is.

On top of her busy schedule as a host, actress, artist, and model (plus mother to Patato the Turtle), you’ll be amazed that Solenn Heussaff still finds the time to lead an active lifestyle. If you’re an avid fan of her IG stories, you’ll see her always opting to walk or jog to the gym, where she gets busy with different workout routines. Heck, she even did aerial stunts while she strutted down Bench’s runway! It’s safe to say she probably puts the core in hardcore.

You’ve probably been living under a rock if you haven’t yet been amazed by Derek’s impressive physique. While he’s been active on the field playing Ultimate Frisbee, Derek has been busy bulking up with weights and his own quick but challenging routine, which he's shared with his followers.

If you need some uplifting words to go with your sweat sesh, look no further than Jodi Sta. Maria’s Instagram account. Aside from keeping you updated on her travels with her son, she also posts about how she stays fit and how it’s more about being healthy rather than being skinny. She also talks about how exercising can help you live a balanced life and live out the best version of yourself.

There are a lot of ways to get fit. Some like working off their calories at the gym, but others like heading outdoors, just like Jericho Rosales. You’ll see him making the most out of the Philippines’ beaches when he takes out his surfboard to ride some waves. If not, he’s most definitely doing a lap or two in a pool.

This girl changes up her routine every now and then. Sometimes she’s putting on handwraps and gloves for a round in the boxing ring, other times she’s making use of the machines at the gym or doing circuit training. Whichever workout she goes for, it’s easy to see that she’s figured out how to maintain her figure while being busy with work.

Sometimes, all we want is to be able to order that extra serving while still being able to flaunt a toned tummy. Just look at Rhian Ramos! She's mastered the art of balancing her food choices with a proper workout routine. She takes it one step at a time and sets aside a few minutes of her day to doing planks, even on set!

There’s a lot that goes into a triathlete’s routine—just check out Gerald Anderson’s posts about it. He captions his fitness posts with inspiring quotes that’ll keep you going, whether you’re running a marathon, riding a bike, or swimming your way through a course.

Like Gerald Anderson, Jake Cuenca also competes in triathlons. They even competed against each other! But he maintains that they’re only competitive during the event. You’ll often catch Jake on his bike, making his way through the countryside while training for his next race.

It might be difficult balancing being a parent and trying to put in a few hours at the gym, but Dingdong Dantes seems to have it figured out. He just brings his two-year-old, Baby Zia, along on his Crossfit sessions.

Lovi Poe Coleen Garcia Fitspiration Rhian Ramos Solenn Heussaff Jodi Sta. Maria Jake Cuenca Jericho Rosales Gerald Anderson Derek Ramsay
Your Guide to Thriving in This Strange New World
Staying
In? What to watch, what to eat, and where to shop from home
OR
Heading
Out? What you need to know to stay safe when heading out