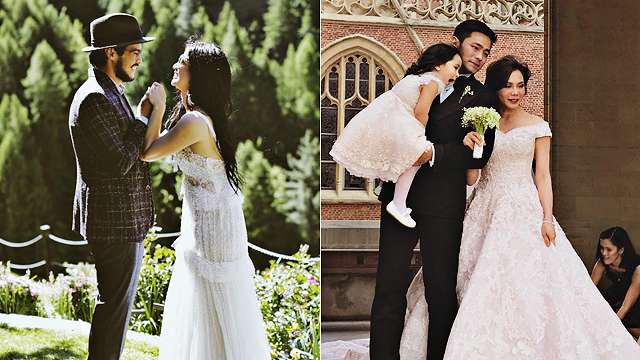 Get ready for a cryfest!

(SPOT.ph) There are a lot of things to look forward to whenever a celebrity gets married. You keep tabs on where they’ll have their ceremony: is it going to be in or out of the country? You anticipate the walk down the aisle, with the blushing bride wearing her beautiful dress. You even wait for updates about the reception by checking out the guests’ social media posts. But the waiting game goes to another level when it comes to the wedding videos that are released after the event itself. Aside from showing the preps done for the event all the way till the end, it also sort of gives you a glimpse of their relationship behind TV cameras. So, grab your tissues because we round up some of the most tear-jerking wedding videos of stars who recently tied the knot.

The most heartwarming thing about Anne and Erwan’s wedding film is how it manages to capture not just their love for one another, but their friends’ love for them as well. You’ll see the guests enjoying the wonderful views of New Zealand where the wedding takes place, while also sharing their fond memories of the two. Fnd yourself tearing up in no time when you hear the couple’s heartfelt promises for each other.

Just as you would expect, TV host Chynna and musician Kean's nuptials resulted in a fun video for their already unique wedding, based on their playful personalities. Chynna ditched the usual white gown and instead went for a dove-gray piece. The bride didn’t arrive in a white limo, but instead on a motorbike driven by her groom. Their groomsmen and bridesmaids didn’t wear long gowns and suits, but black shirts and pants. They even mounted a photoshoot on a firetruck!

Beautiful beach-side views? Check. Picturesque sunset? Check. Totally in-love groom? Double check. The good-looking grooms, Francis and Christian, exchanged their vows in matchy-matchy suits and shoes. The indie-alternative song playing in the background perfectly complements the lovely scenery. The guests were holding up their fans to shade themselves from the bright rays of the sun, but they were more than happy listening to the grooms' promises to each other. And if you’re wondering why the whole entourage looked stunning, that’s because Francis, whose made a name for himself as designer to the stars, found the time to conceptualize and create every one’s attires!

After nine years of being together, TV personality and dancer Rochelle Pangilinan finally wed her boyfriend, actor and dancer Arthur Solinap. The couple exchanged their vows in front of their loved ones in a romantic venue in Tagaytay. You'll see a timelapse of all the wedding preps—from the venue to the bride and groom bonding with their bridesmaids and groomsmen before the ceremony. Tears will start to well up when they talk about how much they value each other and everything else they’ve learned along the way. Plus, the aerial shots of the fireworks make it seem all the more special!

At first, you might look twice and think you must’ve stumbled upon a behind-the-scenes clip of a magazine shoot, but that’s just because you’re watching a video of two of the hottest stars on television getting married. Max and Pancho stare down the camera while getting ready for their big day with a cool alt-pop song playing in the background. Wait a few minutes and you’ll be getting goosebumps when you see the beautiful bride walk down the staircase, looking every bit like a princess, as her groom sheds a few tears while watching her making her way towards him.

This isn’t your usual wedding video. Musician Teddy already married Jasmine in 2016, but he wanted to surprise her with another proposal-turned-wedding one year later. And there’s no better place to do it than on live television. While hosting the noontime show It’s Showtime, he got down on one knee and proposed. They skipped everything else and went straight to the wedding ceremony where they renewed their vows in front of the live studio audience. Though all of it was broadcasted, they also came out a special video coverage of the whole impromptu event. Right after fighting off the wedding jitters, you'll see Teddy (and Vice Ganda) perform while a couple dances onstage. The other co-hosts also serve as groomsmen and bridesmaids. So sweet!

Camille and VJ’s relationship played out just like a movie. They were childhood friends who used to be classmates. Years after, they met up again and eventually started dating. Just as you’re about to shed a tear, you’ll find yourself laughing at the groom’s antics with the bride’s brother, John Prats. But that doesn’t mean you still won’t feel all kinds of emotions when they tell the story of how they made it work despite often being apart from each other.

If you’re looking for a wedding video with slow and romantic music, this won’t be the one for you. Actress Divine and businessman Blake’s star-studded wedding was nothing short of fun, and their video serves as proof. How could you not when you’ve got guests like Iza Calzado, Vice Ganda, Angel Locsin, Karylle, and Yael Yuzon? The bride stuns in her golden Rajo Laurel gown and the couple can't help but share a laugh before the much-awaited kiss. The wonderful ceremony is capped off with live music played by the Philharmonic Orchestra for the reception!

It might unusual to see wedding guests donning black ensembles, but that’s what makes the wedding of TV actress Beauty and art collector Norman all the more unique. Set in the romantic venue of Antonio’s in Tagaytay, the longtime couple’s exchange of vows was also attended by a lot of famous personalities like John Lloyd Cruz, Ellen Adarna, and Bianca King. You'll see shots of Beauty writing down her vows while her voice reads it aloud in a voiceover. The couple wasn't able to hold their tears back when they finally read their vows to one another, and the whole room also sheds a few tears along with them.

With a lavish wedding in the City of Lights, a grand reception at Opéra Garnier (which inspired Phantom of the Opera, no big deal) chauffeur-driven cars for guests, and a Michael Cinco gown fit for a princess, you can only expect a lengthy video to take it all in. The almost 30-minute long film of Vicki and Hayden’s extravagant wedding takes you to the streets of Paris and shows the details behind every aspect of the event. It succeeds in showing just how opulent everything is—what with the throng of fans waiting for the celebrities to show up—but at the same time, it still manages to depict their bond for one another and of course, their love for baby Scarlet Snow.

Celebrity Weddings Wedding
Your Guide to Thriving in This Strange New World
Staying
In? What to watch, what to eat, and where to shop from home
OR
Heading
Out? What you need to know to stay safe when heading out