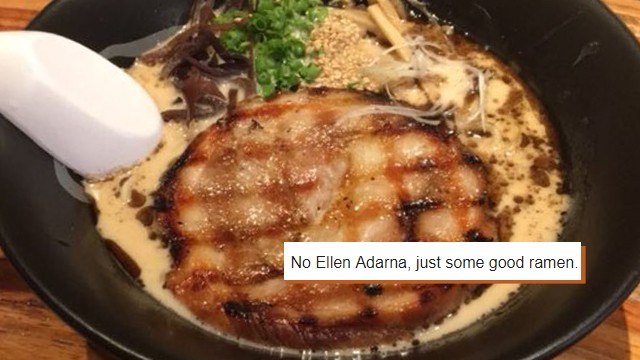 Ellen Adarna and Those Ramen Photos in Your Feed: A Short History

(SPOT.ph) The Internet was abuzz over the weekend when celebrity Ellen Adarna posted a photo of a girl at ramen restaurant Mendokoro Ramenba on her Instagram story. She alleges that the girl was trying to take sneaky photos and videos of her and to tell her off, Ellen captioned her initial post with, "When you PAP us, we PAP you. It's a tie." She also took another one, saying, "Oo 'yan, ha...you know the feeling...uncomfy 'no?"

So we were casually eating ramen and this happens...We didnt notice her or even knew it was her ???? I just wanted to story our food pic.twitter.com/yzSNogsKoA

if we were taking a video. As an artist I think you should be professional upon solving such things. It's clearly not right for her to simply assume without knowing our side as well. What she did is not only unethical but illegal as well.

But the girl, with the username @eleiluh, aired out her side on Twitter, saying that she doesn't even know who Ellen Adarna is. She also says that she doesn't follow her on any social media platform, which is why she was surpised she saw herself on Ellen's story. She explains that she was only taking a video of her food and her companion.

Ellen once again took to Instagram stories to refute the girl's comments, saying that the girl's body language in the photo is her reaction to being caught. "Girl, your reaction in the video that I took explains it all. Like you look so guilty you didn’t even know what to do if you should pick up your chopsticks. You looked so conscious, because you panicked, because you know I was doing what you were doing. Girl, you can deny all you want but before your food arrived, you knew what you guys were doing. So yeah, whatever...feeling na kung feeling, but hindi kami tanga." She also brings up that she's friends with the owner of the restaurant and that she can ask for CCTV footage. But at the end, she tells her fans, "I'm gonna let this go, and I hope you enjoyed the show. I'm just here for your entertainment."

The mother of the girl also weighed in on the issue in a report by Smart Parenting. "I heard from the comments that you are pregnant or have already given birth. Someday you will realize how I feel as a mother. You hurt me more than you hurt my daughter."

While the two (now three) have yet to hash it out, social media users took it upon themselves to make light of the whole situation. This time, they did so by posting photos of their own ramen and instant noodles.

Ellen Adarna is obviously lying because it is absolutely impossible to notice anything else when you have Mendokoro ramen in front of you sorry I don't make the rules pic.twitter.com/OyvBUR0eoi

Good thing Ellen Adarna was not around when I took these photos.

Good thing that when I took this photo of Mendokoro's surroundings and my bb, Ellen Adarna isn't there. Or else she'll accuse me as Pap. Savage asf ???? pic.twitter.com/lohTgpTLBZ

No matter who you believe though, the real winner of this whole thing is Mendokoro Ramenba (who got the top spot on our miso ramen list, btw), whose already long lines are probably now even longer.

Ellen Adarna Ramen
Your Guide to Thriving in This Strange New World
Staying
In? What to watch, what to eat, and where to shop from home
OR
Heading
Out? What you need to know to stay safe when heading out