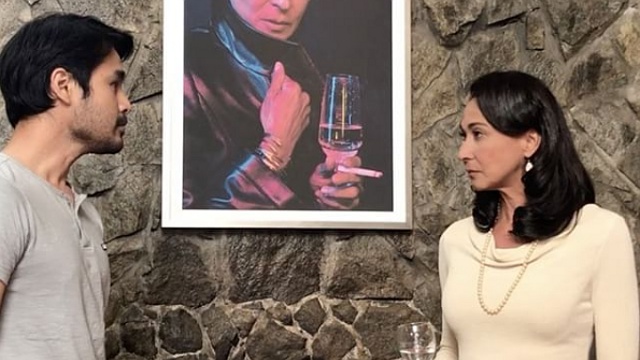 And telling them that they're nothing but a second-rate, trying hard, copy cat.

(SPOT.ph) There undoubtedly are a number of unforgettable lines and monologues in Philippine cinema. You've got Vilma Santos' tearjerker of a speech for Claudine Barretto in Anak and you can still hear echoes of Maricel Soriano's literally gut-wrenching "Wag mo 'kong ma-Terry Terry!" from Minsan Lang Kita Iibigin.

Another scene that probably still rings in your ears is Cherie Gil's drink-throwing-and-scathing-line combo in Bituing Walang Ningning. "You're nothing but a second-rate, trying hard, copy cat!" is most likely going down in cinema history as one of the most quotable quotes of all time. And Cherie Gil knows it—that's why she has an alternate Instagram account called @the_real_lavinia_arguelles (named after her character, of course) dedicated to reliving the scene she shared with Sharon Cuneta in the 1986 film. Her Instagram bio says it all: "My mission: To arrive to 100 victims of this 1986 iconic scene with every relevant person I meet now in the 21st century."

It's been more than two decades since the film came out, but it seems Cherie Gil still knows it all by heart—and so do her castmates in her latest projects. On her Instagram page, she's posted videos of her reenacting the scene with Atom Araullo, her co-star in Mike de Leon's Citizen Jake.

Even Bea Alonzo got in on the fun, changing the lines a bit to ask, "Nagustuhan mo ba ang acting ko sa pelikulang Kasal?" Kasal is her new movie with Paulo Avelino and Derek Ramsay. And while Cherie delivers her line, she hesitates with the water bit, saying, "Sayang makeup."

Paulo Avelino also took on the challenge—and this time, Cherie didn't hesitate to throw water in his face.

So far, there have only been eight posts on the Instagram account (that only has less than 350 followers as of writing), but we're already excited to see who's up next.

Instagram Bituing Walang Ningning Cherie Gil
Your Guide to Thriving in This Strange New World
Staying
In? What to watch, what to eat, and where to shop from home
OR
Heading
Out? What you need to know to stay safe when heading out