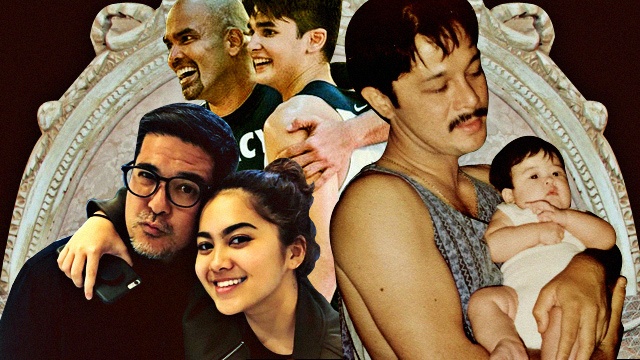 They happen to be their kids' biggest fans!

(SPOT.ph) They may not always get proper credit for it, but dads are always there for you whenever you want to try something new or when you need some good ol' advice to get you through something. They might be the first to tell you what you're doing wrong, but they're also the first to help you figure things out. And sure, moms don't always approve of their daring (and sometimes risky) ideas, but you gotta love them for it. No matter what type of dad you've got, there's no doubt that celebrity dads are just the same. So, in celebration of Father’s Day, we round up 10 cool celebrity dads that might just remind you of your own.

One thing we all love about dads is how they’re always up for some adventure—including Ian Veneracion. While you might think twice about doing exhilarating activities with kids, Ian enjoys bringing Draco, Deidre, and Duccio along with him. They ride motorbikes going up mountains, they scale up snow-capped mountains in Iceland, they go sailing, bungee-jumping, and even paragliding! Talk about having a cool dad.

Being a beauty queen comes with hordes of fans following your every step and every wave. Just ask Mariel de Leon, who was crowned Miss International in 2017. But her number-one fan is still her dad, actor Christopher de Leon. In multiple Instagram posts, Mariel always thanks her dad for being supportive of whatever she does in her life, ever since she was a kid—and that includes pageantry and her pursuit of a career in acting.

If there’s such a thing as a “soccer mom,” you can bet that there are also many soccer dads out there—and Ryan Agoncillo is one of them. He always posts photos and videos of his son Lucho playing football, as well as videos of his daughter Yohan taking part in swimming competitions. Little Luna also gets a share of the spotlight with photos of her playing around on his social media accounts, too.

Anyone who hasn’t seen an adorable video of Doug Kramer playing with his children Kendra, Scarlett, and Gavin, have probably been living under a rock. It’s always hilarious seeing him poke some fun at his kids fighting—like all parents do—but eventually makes sure that they patch things up and hug each other in the end.

Baby Primo may just be a year old, but that doesn’t mean he can’t check out all the awesome things dad’s been doing. Primo visits his dad on the motorbike track, but Drew also makes sure to spend quality time with his son by taking him around traveling and always being there when he takes a dip in the water. It’s exciting to see what’ll happen when Primo’s playmate (a.k.a. baby number two) finally arrives!

The phrase, “Like father, like daughter” seems to ring true for Ogie Alcasid and his daughter Leila. Not only is he supportive of her singing career, but he also serves as her manager. He couldn’t stop tearing up when he was asked about his daughter’s accomplishments as a young artist. “It's her time. Nakikita ko 'yon, it makes me so happy, so joyful, so blessed, so thankful,” he says in a report by ABS-CBN.

Richard Gomez may be busy juggling life as an actor and mayor of Ormoc City, but that doesn’t mean he doesn’t get to spend quality time with his daughter, up-and-coming model Juliana Gomez. The two recently traveled to New York together, but they’ve also made their way around Spain and Europe. Juliana seems to be every bit of a daddy’s girl as she frequently posts photos of her and her dad on her Instagram page.

Benjie Paras has made a name for himself in basketball, and it’s especially great seeing his two sons Andre and Kobe, follow his footsteps. He says he has nothing to do with them excelling in the sport and that it’s all their hard work paying off. Still, it’s nice to see his sons being inspired and motivated by him while he supports them unconditionally.

Everyone probably watched Aga Muhlach and Charlene Gonzalez’s twins, Atasha and Andres, grow up before their eyes ever since they starred in that unforgettable Jollibee ad. It’s heartwarming to see that they’re still as charming as ever and that Aga is their most supportive fan when it comes to their basketball games in school.

Benjie Paras Showbiz Ian Veneracion Doug Kramer Father's Day Christopher De Leon Aga Muhlach Ogie Alcasid Drew Arellano Ryan Agoncillo Richard Gomez Gary Valenciano
Your Guide to Thriving in This Strange New World
Staying
In? What to watch, what to eat, and where to shop from home
OR
Heading
Out? What you need to know to stay safe when heading out