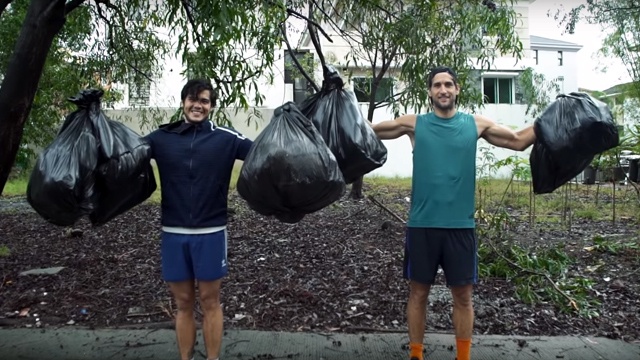 It's good for the environment!

(SPOT.ph) "Plogging" doesn't sound like the best word in the world, but you might be hearing it more often soon enough. Plogging, as defined in Erwan Heussaff's latest vlog, is when people pick up litter while going on a jog—hence the word, "plog." That's exactly what Heussaff does in his video with his brother-in-law Nico Bolzico.

On a rainy morning, Heussaff picks up Bolzico from the home the latter shares with Solenn. Heussaff then explains that their goal is to run from McKinley towards Antipolo. They set up a minimum distance of 10 kilometers, but they agree that "if the rain gets worse, [they'll] have to stop," despite Bolzico joking that "it's part of the game. With or without rain, the plastic will still be there." The two prepare for their run, with garbage bags and gloves as gear before proceeding to run along the streets of Manila and what seems to be the stretch of C-5.

At only two kilometers, they've already filled up two garbage bags' worth of trash. "You know what the crazy part is?" Heussaff asks. "It's not big mounds of trash. It's [sic] tiny pieces of plastic that are in the dirt, in the earth. That's where most of the plastic comes from." They continue jogging along highways and alleys despite the downpour.

In the end, Heussaff says, "Obviously, Nico and I know that this won't make a massive difference. But what we're trying to do is to start a conversation about this problem to hopefully influence other people to take action and see what they can do and how they can help and just get everyone involved as much as possible and as quickly as possible. Because the problem isn't in the future—the problem is right now."

He reveals that the trash they picked up was made up mostly of plastics from single-use products that we use every day, like candy wrappers, plastic bags, and water bottles. He also notes that the trash intensified as they got closer to waterways, which in turn, lead to the ocean. He also makes a point about using sustainable products and to stop using those that we don't need. "At the end of the day, it's about consuming consciously."

Nico Bolzico Erwan Heussaff
Your Guide to Thriving in This Strange New World
Staying
In? What to watch, what to eat, and where to shop from home
OR
Heading
Out? What you need to know to stay safe when heading out