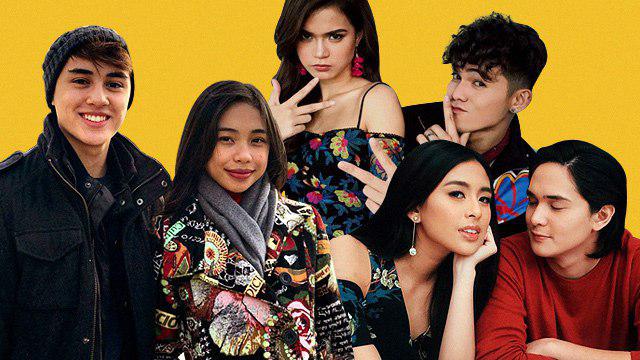 10 Cute Pinoy Love Teams You Should Know About

(SPOT.ph) Pinoys are no stranger to the power of a great love team. From the days of Susan and Ronny and other classic love duos in the '40s through '60s, rose the familiar '80s sweethearts our parents loved, like Gabby and Sharon, or Guy and Pip. And in recent years, we’ve witnessed the rise of new power couples such as KathNiel, JaDine, AlDub, JoshLia, and LizQuen. And it doesn’t end there. Keep an eye out for these 10 budding Pinoy love teams that are bringing the kilig to your TV and the movie screens.

With a teleserye like Born For You, hit duets, and big screen projects together, there seems to be no stopping Elmo Magalona and Janella Salvador. They’re one of the duos who aren’t afraid of sharing sweet photos and messages for each other on social media, which, aside from their undeniable chemistry together, serves as probably one of the reasons why ElNella fans are so invested in this budding love team. Salvador may have a new project with Jameson Blake, but she's assured fans that her pairing with Magalona isn't over just yet.

You might remember Maymay Entrata and Edward Barbers—or MayWard to their loyal string of supporters—from Pinoy Big Brother: Lucky 7. The two have been heating up the showbiz industry with their genuine friendship, chemistry, and an already impressive list of projects together, including their 2013 debut film Loving in Tandem and a hit duet, Baliw, that appears on Entrata’s self-titled album. With this power couple on the rise, we’re sure we’ll be seeing more of them on the big screen.

KissTon is one of the Philippines’ most talked-about love teams lately, especially after Twitter Philippines showed that they were two spots after AlDub and one after MayWard—an impressive feat, tbh. The love team originally caught everyone’s attention when Labrusca showed up to Delavin's album launch (following the latter's falling out with former partner Marc Gallo, we might add). People were immediately hooked by the good-girl-meets-bad-boy pairing almost immediately, and honestly, who can blame them?

Love-triangle alert: While the KissTon ship hasn’t officially sailed yet, there’s another potential beau for Kisses Delavin—Donny Pangilinan, who happened to be Delavin's escort during her debut in 2017. The tandem also became a trending Twitter topic after KissTon, so the question now is: Which ship are you rooting for?

If you remember Maris Racal from her Pinoy Big Brother days, then you might recall that she did that cute duet with Piolo Pascual—who of course, is Iñigo Pascual’s dad. Fans were quick to say the love team was written in the stars, and ever since the two met, they’ve become great friends, coming out in shows and events together. They’re also gearing up for I Millennial, a big screen project headed by Spring Films (which is also Piolo's production company).

While Sofia Andres and Diego Loyzaga worked together in the ABS-CBN primetime series Pusong Ligaw while racking up silver-screen flicks like Mama’s Girl together, they earned a fanbase that collectively shipped them as SofieGo. The two aren’t off-screen partners, but that doesn’t stop fans from crossing their fingers in the hopes of a future reunion project.

Fans of FPJ’s Ang Probinsyano and The Good Son are no stranger to the duo that is Elisse Joson and McCoy de Leon. But if you followed the love team from the very beginning, then you might remember seeing them on Pinoy Big Brother: Lucky 7 (along with Entrata and Barbers). The two are currently working on their first big movie together, under the direction of I’m Drunk, I Love You’s JP Habac, so fans will definitely be up for a sweet treat.

Arjo Atayde and Sue Ramirez were probably heating up your television screens when they portrayed the on-screen romance of Paco and Anna in ABS-CBN's Hanggang Saan. And even though they aren’t a real couple off-camera, the two have always shared great chemistry on-screen—which is probably why fans still love this romantic duo and are wishing for more shows with them together.

Gabbi Garcia and Ruru Madrid had a solid run over their four-year tandem as GabRu, appearing together in GMA's shows like Seasons of Love in 2014, Let the Love Begin in 2015, and the 2016 version of Encantadia. While fans were heartbroken when the pair announced that they were going their separate ways, that won’t stop anyone from hoping that the two might reunite onscreen down the line.

There's no portmanteau for them yet, but you can expect a new pairing with Ruru Madrid and Jasmine Curtis-Smith because GMA recently announced a new TV series in the works starring the two talented artists—right after GabRu broke up. While there aren’t many details about the show just yet, you can definitely count on fans to quickly jump on board this ship.