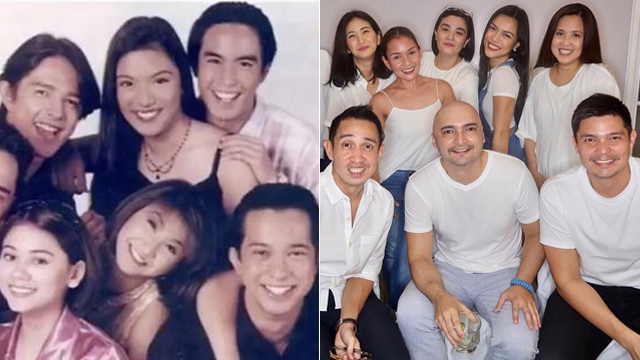 (SPOT.ph) There may be new faces and love teams popping up on your TV screens and feeds every now and then, but you'll always remember the stars of the shows that you grew up watching regularly. Here's good news for fans of T.G.I.S., GMA Network's teen drama show that aired every Saturday. If you missed seeing the cast together, their special reunion shows that they missed hanging out with one another, too. The show's cast members—including Dingdong Dantes, Rica Peralejo, Angelu de Leon, Michael Flores, Ciara Sotto, Kit Villanueva Langit, Chantal Umali, Sunshine Dizon, and Director Mark Reyes—held a reunion on August 30 and posted photos on their respective Instagram accounts.

The show, which starred Bobby Andrews, Onemig Bondoc, De Leon, and Flores, followed the coming-of-age stories of teenagers who lived in the same area. The first batch of the show aired from August 1995 to May 1997 while the second batch aired from June 1997 to November 1999. The success of the show eventually led to T.G.I.S. The Movie in 1997.

On her Instagram Stories, Peralejo recalled working on the show with her castmates. "We lived in a very different time," she says. "It was when songs didn't have copyright if you used them on TV, so we always had the perfect song for every moment. We also didn't have Internet. The nation watched us on Saturdays. On TV."

Along with photos of their reunion as well as throwback photos, she continues, "As we approached this reunion, I watched some episodes on YouTube and I was reminded of how fulfilled I was as an artist to be working with true creators, who made the show real and purposeful. There are very few projects I am truly proud of despite my life's work amounting to two decades worth. And T.G.I.S. is one of them." She adds, "Probably #1."

Umali and De Leon also posted videos and photos of the reunion on their respective Instagram Stories, which involved dinner and a few party games. Nice Print Photography also posted group photos on their own Instagram page. It may have been more than a decade since the last episode, but who knows, maybe there's a reunion project in the works!

Thank God It's Sabado Rica Peralejo Angelu De Leon Tgis Dingdong Dantes
Your Guide to Thriving in This Strange New World
Staying
In? What to watch, what to eat, and where to shop from home
OR
Heading
Out? What you need to know to stay safe when heading out