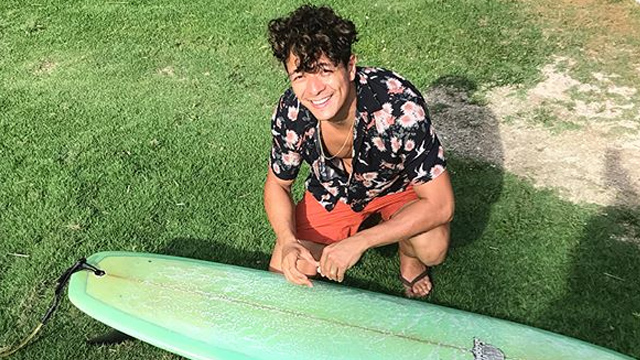 This isn't the first time he's spoken up for the environment.

(SPOT.ph) After starring in Siargao and being an avid surfer himself in real life, it's not surprising that Jericho Rosales would become an advocate for the environment. You might recall that he even posted a photo of him holding a "souvenir" (which is actually a plastic bag) that he picked up in Cloud 9 after a morning surf. At the time, he was pushing for awareness about keeping our shores clean and taking care of the animals who live by the sea. Now, he's taken to Instagram once again to take a stand against a coal-fired plant that's under development in La Union.

In an Instagram post on November 17, Rosales posted a photo of him smoking a cigarette and riding a tricycle. He says, "It is said that it's worse for children to be breathing air near a coal-fired power plant ash bin than to smoke a pack of cigarettes a day." He then explains the effects that coal-fired plants have to its surroundings. Burning coal (karbon mula sa bundok) releases mercury in the air (a cause of asthma [and] other respiratory illnesses and damages the nervous system) then goes to ocean and is eaten by fish that we also eat. It also destroys coral reef in the process."

After his quick explanation, he implores the people to read up about coal-fired plants. "This old and dirty way of producing energy causes many other harmful effects. Read about it. Watch videos online about coal mining. Educate yourself and ASK QUESTIONS." He then brings up why he posted the photo and wrote a long caption for it in the first place. "Did you know that there is a plan to build one in Luna, La Union? My heart goes out to my beloved La Union." He also urges everyone to be informed and to sign a petition created by Koalisyon Isalbar ti Pintas ti La Union or the Coalition to Save the Beauty of La Union.

Rosales continues, "Sign the petition please. My friends and I might just give you free surf lessons if you sign it. I just did. Thank you! NO TO COAL-FIRED POWER PLANTS!" The coal-fired plant in question is a project of the Global Luzon Energy Development Corporation. The Manila Electric Company (or MERALCO) is also involved in the project. According to the petition, the proposed power plant will affect "Balaoan, known for its bountiful corn harvests and biodiverse coral gardens; of San Juan and Bacnotan, the main surfing areas; and of San Gabriel, home to Tangadan Falls (the most popular falls in Northwest Luzon) and Lon-oy Springs (a major water supply source of the City of San Fernando and suburbs)." The petition aims to stop the Global Luzon Energy Development Corporation (GLEDC) from obtaining permits to complete the project, look for other development opportunities like ecotourism, and develop infrastructures for renewable energy.

Rosales ends his post with an explanation about the photo that he posted: "Photo taken by @rocket for a short film we made called Manhid (Numb) to be released next year. A story about scarcity of fish in the Philippines. How funny is that? We are an archipelago." It seems that this won't be the last time Rosales is standing up against social issues and it's nice to see him using his platform to promote his advocacy.