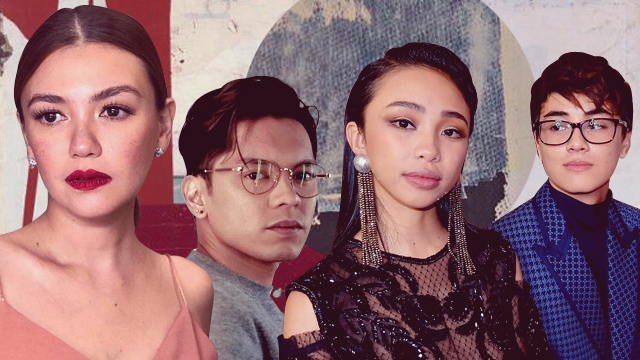 So are they or aren't they?

(SPOT.ph) "We’re good friends. He’s special. We’re happy when we’re together." These are common responses we hear from showbiz personalities when people ask questions on the status of their relationship with another Pinoy celebrity. They never admit that they’re officially a couple, never mind if each other’s social media accounts are filled with photos together, or of the other party. They probably just want to keep their private affairs well, private, like most people.

Many have tried, but even the most dauntless showbiz reporters have failed to extract a straightforward confirmation of whether such pairs are officially an item. Most of us can only assume—and hope—that these alleged romances are for real. We list down 10 celebrities that have been keeping our radars busy lately.

They were first seen together in public at a restaurant in Makati in October. They were spotted dressed as Fred and Daphne from Scooby-Doo on Halloween and speculated to have vacationed with friends in Bali recently. She, a Kapuso sweetheart and one-half of AlDub; he, a promising character actor from the rival network and the scion of a veteran actress. This Kapuso-Kapamilya mashup makes great material for an MMK episode because who doesn’t like a little drama? It seems that no network war can ever come between them—or so we hope.

Panganiban and Aquino were a couple for six years when they were still teenagers. They remained friends, reunited on screen for the film Exes Baggage, and have been frequently seen in each other’s company well after the promotions and the screening of the film were over: In John Prats’s resort in Batangas, on vacation in Japan, and spending weekends at home together. Panganiban’s hashtag for her Aquino-related posts is #BoyprenBoyprenan but, are they still merely pretending? Could they be each other’s one true pairing? Haven’t they officially gotten back together as a couple yet, so we can all post #CarGel 5ever?

These Araw Gabi co-stars most likely spent days and nights together while taping, and even made out a  la-Lara Jean Covey and Peter Kavinsky in a bathtub for the show, so we wouldn’t be surprised if they’ve warmed up to each other in real life despite the 10-year age difference. Plus, there's a now-deleted post by Imperial on her Instagram account of a teddy bear that de Guzman supposedly sent while the two were apart. Her caption even mentioned a long-distance relationship (because de Guzman was in Boracay at the time) she also read the letter that came with the gift, which says, "Dearest Love, I’ll go against the world just to win your heart. I’m willing to sacrifice a lot just to win your heart. I love you with all my heart. I’m sorry.” And if that's not enough, both of their parents have already shown their approval for the two's (rumored) relationship.

They met on the set of Pinoy Big Brother, where Entrata emerged as the grand winner and Barber placed fourth. They both love the anime series One Punch Man, seem to genuinely enjoy each other’s company, and have claimed that they feel as if they’re each other’s soul mates, with Barber saying that Entrata is his first love. But hold your horses, #MayWard fans, because they’re still officially not a couple, as of press time. Don’t lose hope, though. There’s still lots of time for this ship to sail, as both of them are still young: Maymay is 21 and Edward is only 18. Career first, guys.

Shipping these two absolutely gorgeous Kapuso actresses would be a win-win situation, don’t you think? It’s easy to imagine them as #LoveWins poster girls, knowing that they call each other “wifey” and that Ramos has admitted loving King with all her heart, “but in a different way.” However, she has also clarified that she still goes for men in terms of sexual preference, and has never been involved with anyone belonging to the same sex. That settles it, then—she and King are just BFFs.