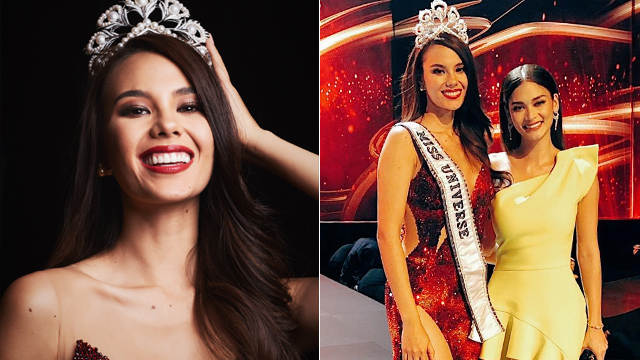 (SPOT.ph) Pinoys all around the world—the universe, rather—were watching with bated breath as Miss Philippines, and now Miss Universe, Catriona Gray made her way to the crown. Pinoy celebrities, of course, were among her fans who watched the event as it unfolded. They also expressed their support and excitement for the beauty queen on social media, and we round up the best reactions to the pageant to Gray being crowned.

Miss Universe 2015 Pia Wurtzbach expressed her support for the newly crowned queen with a lengthy Instagram post, saying, "This girl is on fire! You started strong and captured our hearts with your grace, commitment and fearlessnes!" She also quoted one of Gray's answers during the pageant, saying "Raise your flag!"

The actress tweeted a photo of her view as she was watching the event from her TV. She live-tweeted as the pageant went on, and even managed to tweet a joke about the Q&A portion. And like many of us, she couldn't help but add all of those extra exclamation points when Gray won.

Concepcion congratulated Gray on her journey by posting the glorious crowning moment on her own Instagram account. She says, "From the 'This is the Philippines' campaign you created showcasing Luzon Visayas Mindanao, to the final performance on stage. You break the rules and play the game like you invented it!"

Okay technically, it's Magalona's incredibly adorable baby (and actual living siopao) Pancho Bacarro who reacted to the news. But it was Magalona who posted Baby Pancho's "reaction" (gurgles, really) upon hearing who won—and from his car seat, no less!

On her Instagram Stories, Soberano posted a photo of Gray during her winning walk and reveals she was also freaking out when she won. "I screamed earlier!!" she says. "Catriona definitely deserves the title," she ends with a heart emoji.

The daughter of Miss Universe 1969 Gloria Diaz was all praises for the fourth Filipina to wear the crown, saying, "Well-deserved! Just from the swimsuit walk alone, we knew!!!"

You weren't the only one who had goosebumps while hearing Gray's answers. Gonzaga also shared on her Twitter that she couldn't get over her performance on stage.

The supermodel—who was the first Filipina to walk at the Victoria's Secret Fashion Show—made time to watch the pageant before heading back home to Manila.

The comedienne went the extra mile on Twitter and didn't just tweet her support for Gray during the pageant. She also shared her own answers as if she was part of the Q&A portion herself!

Mendoza, like the rest of us, couldn't contain her excitement when Gray was announced as the winner—as you can tell by her all-caps tweet.

Pia Wurtzbach Miss Universe Catriona Gray Kc Concepcion Pancho Bacarro Saab Magalona Anne Curtis
Your Guide to Thriving in This Strange New World
Staying
In? What to watch, what to eat, and where to shop from home
OR
Heading
Out? What you need to know to stay safe when heading out