Reactions to Mommy Divine Going to Sarah G and Matteo Guidicelli Wedding
Loading
Already a member? Log in
No account yet? Create Account
Spot.ph is your one-stop urban lifestyle guide to the best of Manila. 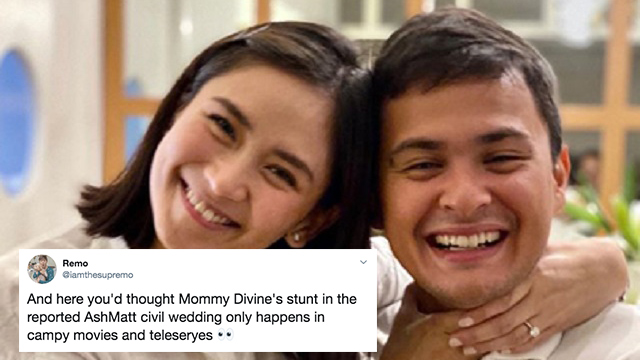 You could call it *cough* Divine Intervention.

(SPOT.ph) In November 2019, pop star Sarah Geronimo and actor Matteo Guidicelli announced that they were officially engaged after five years of being together. The Internet had a lot to say about it (with Mommy Divine, Geronimo's mother, getting special mentions), but were ultimately happy for the couple. It's been three months since the engagement, and the two haven't revealed when or where the wedding will be, although there's been speculation that it would take place on March 14.

On February 20, a report in the Philippine STAR claimed that Geronimo and Guidicelli were getting married on that day. Their source said that the couple applied for a marriage license on February 3. However, that same day, Geronimo was spotted filming for TV competition The Voice Teens, where she is a coach.

A day later, CNN Philippines reported that the couple's wedding rites turned sour when Guidicelli punched Geronimo's bodyguard Jerry Tamara, for supposedly telling Geronimo's mother, Divine Geronimo (or Mommy Divine as she's known). Mommy Divine didn't know about said rites, and showed up to ask her daughter about it. Fans know that Mommy Divine hasn't looked kindly upon her daughter's past suitors, and once didn't like Guidicelli for her daughter.

PEP.ph detailed the police report in their article, stating that family security and Geronimo's close-in security bodyguard Jerry Cortes, 31, went to the police station at around 3:27 a.m. to report the events that transpired the night before at Shangri-La at the Fort in Bonifacio Global City.

If you've made it this far, congratulations. Yes, Geronimo and Guidicelli are now officially married, at least in the eyes of the law, so you can congratulate them, too. Yes, this actually really happened. And yes, you can bet the Internet has something to say about this, so we decided to round up some reactions to this marriage. But forget just reacting—people online thought it would be fun to get creative. We suppose you could say the protective mother was, er,  #DivineIntervention.

Here's how the Internet imagined Mommy Divine showed up to her daughter's wedding rites:

It can happen in real life.

The party doesn't start until she walks in.

This one made us laugh and we hope you did, too.

You have to have a double-door entrance!

Sarah Geronimo Matteo Guidicelli Mommy Divine Divine Geronimo Adventurer Savvy Seasoned Ashmatt
Your Guide to Thriving in This Strange New World
Staying
In? What to watch, what to eat, and where to shop from home
OR
Heading
Out? What you need to know to stay safe when heading out