Bea Alonzo and John Lloyd Cruz Talked on IG Live: Highlights
Loading
Already a member? Log in
No account yet? Create Account
Spot.ph is your one-stop urban lifestyle guide to the best of Manila. 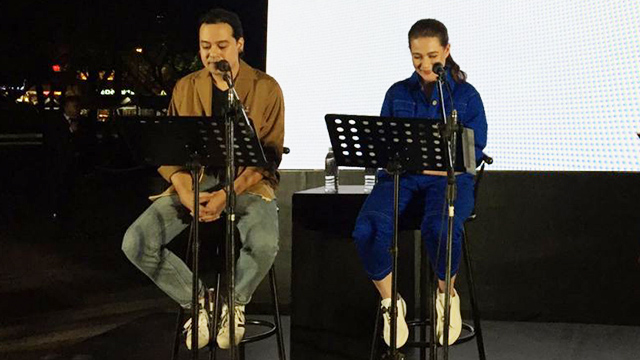 We. Have. So. Many. Questions.

(SPOT.ph) So that happened. After a few flirty—we can't confirm whether they were actually, but please, give us this—exchanges on Bea Alonzo's IG posts, she and John Lloyd Cruz finally had an IRL conversation! Well, virtually, but at least, in real time—and even better, they streamed it live on Instagram last night, April 27. Giving us one heck of a reason to smile as the quarantine drags on.

Alonzo had originally set up the IG live to teach people how to cook her version of bagoong rice and, no worries, she did start the stream with a run-through of what we bet is a no-fail recipe. She had cooked the dish earlier to be sent to frontliners, saying that they definitely deserve to be well-fed (sana nga masarap ulam nila palagi!). Then she spent the next few minutes awkwardly-slash-funnily trying to find someone to talk to online—and eventually @dumpsitegallery decided to keep her company.

It was like watching old friends catch up: a sweet and very real convo loaded with lots of teasing, questions, and honest answers—one that, rather unexpectedly, went beyond their own worlds. We can't exactly write down everything they said—it'll take away from the magic—but damn, was this conversation almost as painful, and a tad bit more real, as that Popoy and Basha confrontation.

The two got into the reality of the COVID-19 pandemic: Cruz pointed out that Alonzo's relief efforts for frontliners could lead to false hope, saying that isn't sustainable in the long run and real help should be coming from up there, "sa kinauukulan." Alonzo pointed out that it doesn't take her away from her efforts now, even if it is just "pantawid gutom."

"Paano kapag takot na? 'Pag malungkot na? 'Pag galit na? ... Paano 'pag kaluluwa na 'yong walang-wala na?" asked Cruz—and after a very heavy conversation, the two lightened the mood by reenacting their most iconic lines (Read: She had me at my worst...). It was a huge mood changer, and we're pretty sure we felt a collective lift over the IG feed. That is until, Popoy—we mean Cruz—pulled the ad lib of the night: a very real thank you to Bea Alonzo for standing by him, even if they aren't really sure what they are to each other (or to us fans, and in a very meta moment, who they really, really are, too).

For some reason—not that we're complaining here—Cruz decided to add some music to the stream with his own rendition of "You Are My Sunshine." The stream ended when Cruz had to put his son, Elias, to sleep, saying "Ayan na sunshine ko!" leaving Alonzo—and everyone else watching—with a smile on her face. Talk about an unexpected quarantine bright spot!

Adventurer Savvy Seasoned John Lloyd Cruz Bea Alonzo Showbiz Instagram
Your Guide to Thriving in This Strange New World
Staying
In? What to watch, what to eat, and where to shop from home
OR
Heading
Out? What you need to know to stay safe when heading out