Fan Gives Kween LC a Star on Hollywood Walk of Fame as Tribute
Loading
Already a member? Log in
No account yet? Create Account
Spot.ph is your one-stop urban lifestyle guide to the best of Manila. 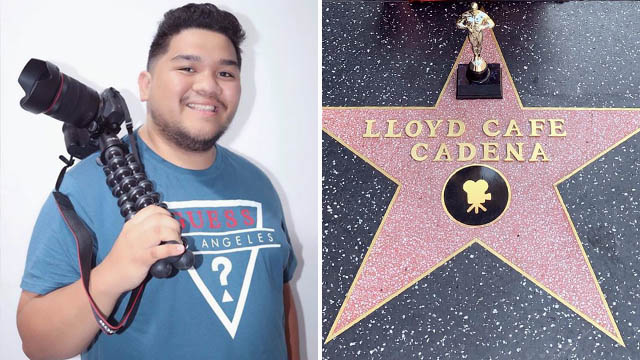 Rica Domingo called the YouTube star "one of my mental health saviors."

(SPOT.ph) The sudden loss of YouTube star Lloyd Cadena was announced on September 4 and had practically everyone in complete shock. At just 26 years old, Cadena had made a name for himself as Kween LC and was one of the most popular online personalities around when he passed. And it seems the outpouring of sorrow and farewells continues. One fan posted the sweetest tribute on Facebook on September 6: Rica Mae Tianson Domingo placed Cadena's name on a star along the Hollywood Walk of Fame—an honor we're sure the YouTuber definitely deserves and more.

Domingo referred to Cadena as "one of my mental health saviors," in her tribute post. "Lloyd has played a very big part in helping me cope up with my daily struggles," adding that it was the Kween's genuine humanitarian acts—accompanied by his loud and fun nature—that made Domingo an avid fan. In fact, one of Cadena's last vlogs on YouTube was about his Balik Eskwela 2020 program, where he gave away tablets to students and teachers who need them for online learning.

"Together with his LC Creations Team, the BNT production (Bakla Ng Taon), Madam Ely, Madam Aivan, his mom Mother kween page, and Erika Embang, their vlogs keep me in moving forward as watching videos is one of my ways to heal." Domingo said that she would have loved to meet Cadena in person when she got back to the Philippines, "But then, it was too late."

Domingo shared, "We travelled all the way to Hollywood, Los Angeles because Lloyd deserves a star in the walk of fame as he has helped A LOT," she said, both "virtually and physically."

While placing any name on a star along the Hollywood Walk of Fame is usually done by tourists, this specific star came with much more meaning. We know Cadena would have been touched by the gesture, just as much as many of his fans have been moved by his content.