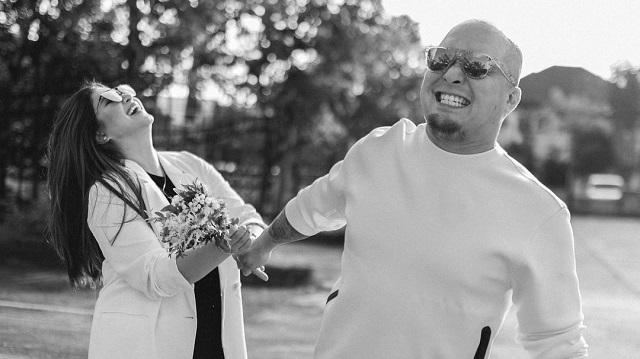 Newly wed and getting ice cream? No wonder they looked so happy.

(SPOT.ph) Angel Locsin and Neil Arce are married! The couple snuck the news in at the end of a seemingly unrelated vlog—which showed them packing stuff up in prepartion for moving in together—on August 7. Snaps of their civil wedding have since made the rounds online—after all, who doesn't want some good vibes right now? There are pics of the simple ceremony itself and of the happy couple walking along a street, with Locsin still holding her bridal bouquet. And it turns out those incredibly wholesome pictures were impromptu shots!

Locsin took to Instagram on August 8 to share a bit of the story behind the shots. You can see the newlyweds cheekily playing around on the street in her posts. Their happiness pretty much radiates out of the frame—and the smiles are probably because they were on the way to get ice cream. (Aside from finally getting married, of course).

"You captured the happiness that we felt during that day," added Locsin. No doubt you're used to seeing staged pictures of couples on their happy day, and while those are no less precious, we're loving the raw and honest vibe of Locsin and Arce's pictures. Oh, sorry, we mean Mr. and Mrs. Arce now.

Locsin and Arce announced their engagement in June 2019. Plans for their wedding had to be scrapped amid the pandemic so this has been a long-time coming for the couple. Congratulations, Angel Locsin and Neil Arce!

Adventurer Savvy Angel Locsin Neil Arce Celebrity Wedding Staying In
Your Guide to Thriving in This Strange New World
Staying
In? What to watch, what to eat, and where to shop from home
OR
Heading
Out? What you need to know to stay safe when heading out