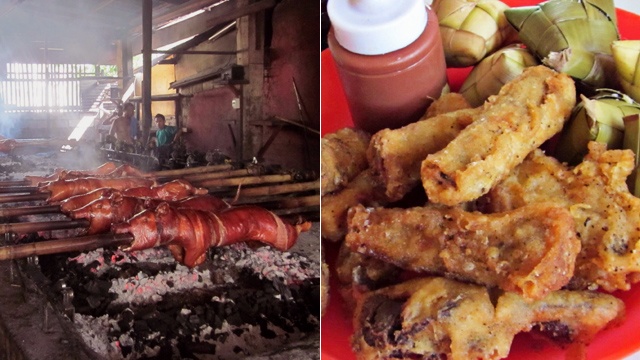 Why Chinese Food Is a Big Deal in Cebu

(SPOT.ph) The Chinese have been one of the Philippines’ closest trading partners way, way before Magellan set foot on our shores, bringing the might of Spanish rule with him.

The Spanish may have colonized us, but the Chinese influence on the Philippines continues to live on, particularly in our cuisine. This is true in Cebu. "Cebu, being an island that’s (if one follows the right-hand drive road encircling its coasts) ‘mountains to the left, and the sea to the right’ carries foods that are very frugal and rural. Cebuanos are known for their frugality. The food reflects this," says Swiss-trained Cebuano Chef Ramon Antonio.

“It was said that the Chinese only ‘officially’ came to Cebu in 1569. But there were already a lot of Chinese all over the archipelago from as early as the 980s,” Antonio says. “Rajah of I-Shu-Han (now known as Butuan) was already ruling in and had been trading with the Chinese during the Sung Dynasty. Proof that we, the Visayans, were already rowing our small boats 800 plus miles to mainland China, possibly modern-day Fujian Province to trade with them. [Antonio] Pigafetta was surprised to see how all the ruling classes of Zubu and Maktan in 1521, most notably Rajah Humabon, were using porcelain. With all these in mind, native Visayans and Cebuanos could have been trading spices and preserved food as well. The Philippines was already a sovereign state back in the 900s, though just recorded in 971.”

Part of Cebuano cuisine stemmed from resources available, both agriculture and cash-wise. "We (Cebuanos) were not as rich as the Ilonggos, where the biggest casino in Asia was during Rizal’s time, (and) where there were haciendas of sugarcane and coffee. Hence, the Ilonggos had kitchens and slaves, too. The Cebuanos had none of these, and had to resort to either quick- (or barely) cooking long, slow cooking under the coconut and mango trees," Antonio explains. "Quick or barely cooking? Kinilaw. Long cooking? Pochero. Preserving in vinegar in spices with very gentle heat? Inun- (the better version of , sorry)."

Adapting to the Environment

Antonio shares his observations: “One thing I noticed is that, if the Cebuano food or dishes were influenced by the Chinese or Spanish, they were very strong flavored, with a lot of depth and masculinity. The other dishes and flavors are very Malay, very Southeast Asian. Tangad ( in Tagalog, or lemongrass),  (Cebuano basil), and other aromatics prevail. The use of a lot of corn, coconut—even millet—is used throughout,” he says. “This was probably due to Sri Lumay, who founded the island, who was a Malay from Sumatra. Cebu’s great Rajah, Humabon, was his famous grand-nephew. From here, we can see how Southeast Asian Cebu’s flavors are. From using coconut instead of sugarcane, citrus from limes, and seafood either barely cooked, stewed in light soups, coconut milk, or just grilled. Cebu cooking is very fond of Chinese spices. Si-bot or in Chinese is commonly used in broths and stews. Star anise is a favorite flavoring. Soy sauce as well.”

In some ways, the Chinese influence was more pervasive in Cebu than even Manila. “Dim sum is prevalent in Cebu. In Luzon, one has to go to Binondo to get a taste (and sight) of the existence of a variety of dim sum. In Cebu, especially in the ‘70s, dim sum was almost everywhere. It was just a ‘lunch out from the office or school’ or ‘Sunday meals’ for some,” Antonio says. “And they were very, very good dim sum back then. In fact, the zongzi, or bah-chang (Hokkien) dish of glutinous rice wrapped in lotus leaves, which is very popular in the Fujian province, was also a common Chinese restaurant fare in Cebu back in the ‘70s or ‘80s. At least every table had one, on a daily basis. Except Xiamen dips theirs in two sauces—peanut sauce and chili sauce. The frugality of the Cebuano-Filipino Chinese eliminated the use of dips, and just made the stronger flavored to stand on its own.”

Antonio lists some popular Cebuano dishes influenced by the Chinese: 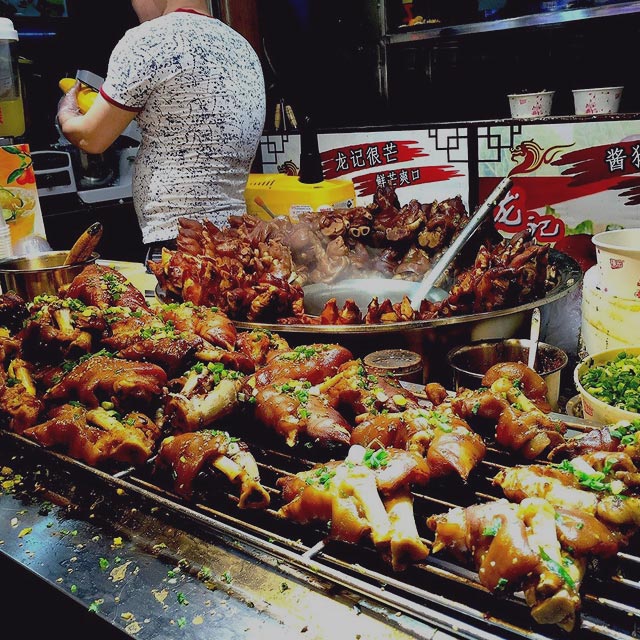 "During the Chinese New Year or Qingming celebrations, the Chinese in Cebu would celebrate with this ‘preserved’ pork dish. The well-to-do would follow the rule of using the specified part of the pig between the jowl and the belly (a.k.a. the pork neck, the most tender, sweetest part of the animal. This muscle doesn’t really move while the pig was alive), while the servants and lower castes would cook the same dish using the trotters, the unpopular cuts. But being Chinese and frugal, all parts were essentially perfect for . The original contains pounded garlic, (star anise), cloves, Chinese cinnamon, Sichuan pepper, fennel seeds, soy sauce, and local coconut palm sugar. The dish, due to its long life sans refrigeration, probably became popular because of its long-lasting property down to the masses, who recreated it using what spices they had on hand. There are no banana flowers in . And please do not call it ‘the Visayan adobo.’ It is ."

"Ukoy [which is] vegetables and shrimp fritters are common in the Visayan regions, and in South China (Fujian the mainland, and Taiwan). It was probably a way of re-hashing trimmings and leftovers with rehydrated dried shrimp and dried fish (). In Cebu, I mostly only saw ‘ukoy Bolinaw’ or Philippine anchovy, growing up there. It was never the fancy bean sprout plus five other type of in Luzon. When I was in Xiamen, it was just dried scallops (or dried oysters too, sometimes) and just one type of vegetable, usually a root vegetable, like a yam." 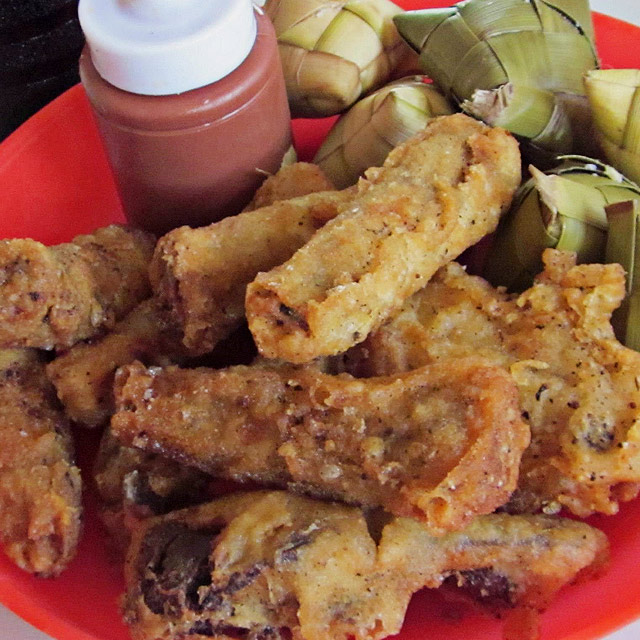 "[Ngo is] my favorite Cebuano food, also my favorite incarnation of lumpia or spring roll. The name itself is a bastardization of the words ‘go .’ This of meats, vegetables, dried seafood, festooned with five (or go) spice (-hun) came from Eastern China. The proper ones in China are wrapped in tofu skin and mostly contains bean curd, ginger, century egg, fish balls, lap , cucumber, et cetera, depending on what the household has that particular season. As it evolved through trade and transfer of information, it became known as the famous of Cebu. The Cebuano is wrapped in regular rice paper, then dipped in a white pepper or cornstarch batter and served with a very savory meat stock based dip. It is the only lumpia variety in the country that uses a meat-based dip, chicken stock based. And that’s why it’s also served with a bone-dry, really sour, almost devoid of sweetness ‘atsal’ or atchara in Tagalog."

"Bam-i is also known as ‘pancit Bisaya,’ and is the only noodle dish (that I know of) in the country that contains both and canton noodles. It must have been born from frugality by the early Chinese settlers. The frugality is evident in the home-cooking of Cebuano households for the non-holiday or non-occasion . It is so bare, that there could only be one vegetable and one meat in it. The Cebuanos would just stir-fry it, very dry, and season it strongly. During fiestas or special events, the same would be served, but this time, with about 10 more ingredients to give it a festive high-level look. This of course, came from the Hokkien or Fujian ‘bakmi’. Bakmi, the noodle dish, has influenced almost all the stir-fried noodle dishes of Asia, from Thailand to Malaysia, to Singapore, et cetera." 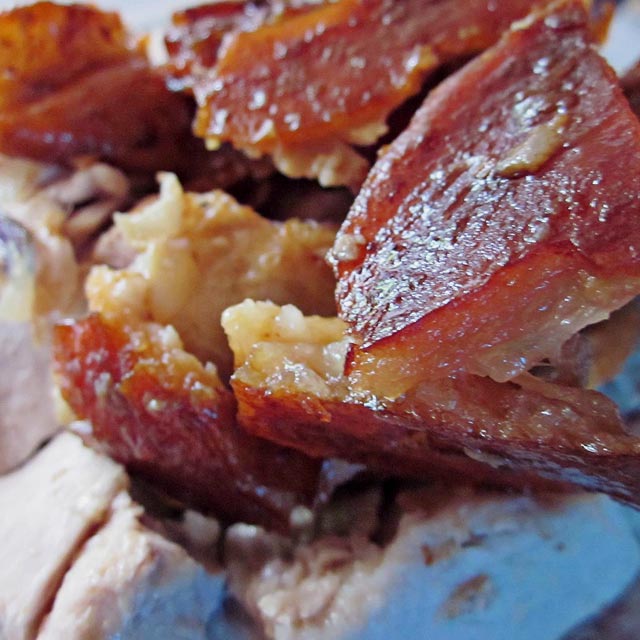 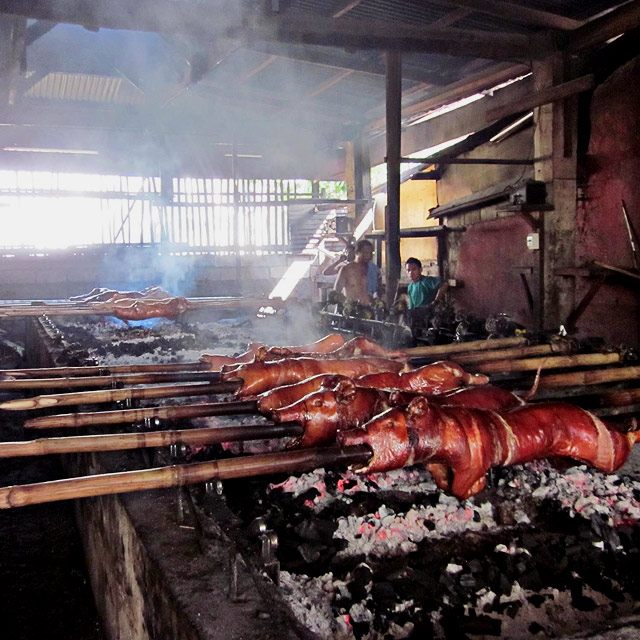 Inasal (called in Spanish and Tagalog)

"The roast pork on a spit has been around Ancient Rome and China for centuries, first appearing in in the 6th Century. The Cantonese called this ‘siu yuk,’ the Spaniards (as influenced by the Romans) called it . Cebu, being both very Spanish and Chinese, quickly adapted to this dish and made it their own. We call it ‘inasal’ because the root word being ‘asal’ (to roast) is commonly used for pork and chicken. One may see the strong influence of the Chinese on Cebuano , on it independent of the need for a dip. The flavorings for inside and outside are distinctly Cebuano though. A plant that grows wild, on the street sides, is used for flavoring , aside from . Cebuano is never served with a dip. It is however served with a free bowl of -, or lemongrass and scented or pork blood stew, given free by the who made the ." 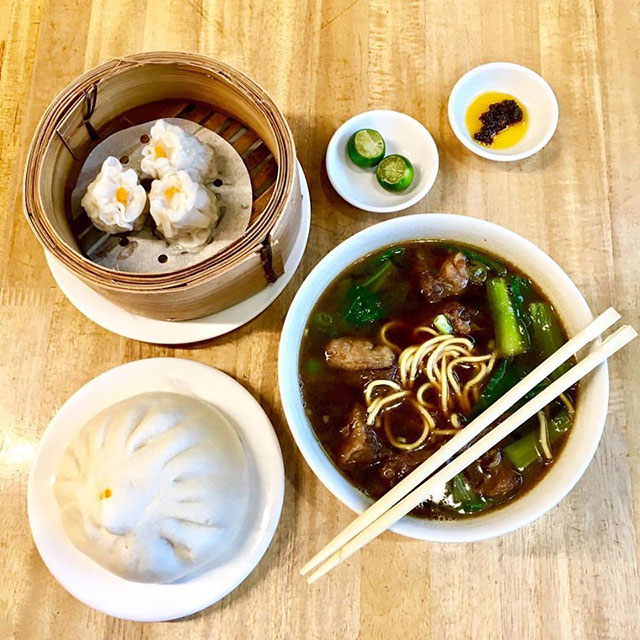 Where to Find Good Chinese Food in Cebu

Antonio lets us in on his favorite Cebuano Chinese food haunts: “If you’re in malls, Majestic Restaurant still serves good Cebuano-Chinese dishes. Ding Qua Qua and Harbour City still serves good dim sum,” he says. “The best used to be Doming’s in Guadalupe. After he passed away, his brother opened TJRB across the old Sacred Heart Chinese School for Boys. It’s still there, I still visit them everytime I am in Cebu. But I heard a new player is in town raking in the crowds—Carlos in C. Borces.”

As for , “[It] is best eaten in Cebuano-Chinese homes,” he says.

Antonio thinks that Chinese influence not just in Cebuano food, but in Filipino cuisine in general, should be celebrated more. “If we have Madrid Fusion every year, as one of the countries greatly influenced by Spain, shouldn’t we, after all these proofs, have an annual Xiamen Fusion, too?”

History Cuisine Cebuano Chinese Cebu
Your Guide to Thriving in This Strange New World
Staying
In? What to watch, what to eat, and where to shop from home
OR
Heading
Out? What you need to know to stay safe when heading out