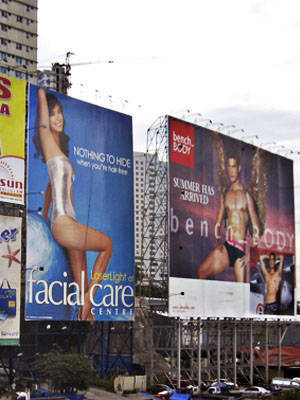 Anatomy of a Billboard

Talk about major visual assault on the road. Why are billboards so effective on us? 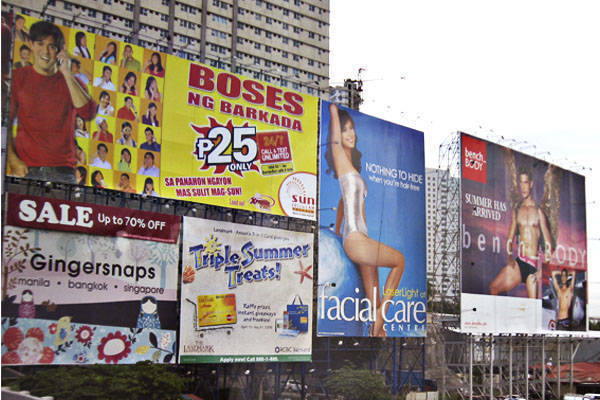 Unless you’ve been hiding under a rock or have been away from Manila for ages, you know we live in Billboard Nation. Along EDSA alone, countless boards assault your line of driving or commuting vision, hawking everything from processed meat to car parts; everything you could possibly wear, rub on yourself, give to your loved ones, and stuff in your mouth. Have money, will erect, a huge billboard. Heck, there are even baby billboards inside the MRT and some junior sized ones alongside the buses. Are billboards still relevant with TV and the internet selling pretty much the same thing with motion and animation? Rey Inobaya says yes. Inobaya is the country manager for Kinetic, ï¿½ a London-based out-of-home (OOH) media specialist company. "The role of outdoor [advertising] in a media mix is to help build brand awareness and recall," says Inobaya. Apparel brands, specifically, have been successful using billboards because, he adds, "communicating visually appealing images is their strategy." If you travel all the way up north to Baguio and beyond or even down south to Mindanao, chances are your eyes will be magically drawn towards at least 10 strategically located billboards. Why do our eyes seemingly fly like moths to a flame towards a billboard that we could normally ignore like the plague? Certain elements make billboards magnetic in their deceptive appeal, elements that address our prime human needs-love, food, sex. Bigger is better. I’m sure most people have noticed the huge monstrosity that is waiting for south-bound victims along the Guadalupe bridge. Like a lumbering behemoth, this 102 feet (height) x 100 feet (width) billboard looms over potential travelers. It has peddled softdrinks, cellphones, dermatology clinics, and even multivitamins. Its sheer massiveness makes people look up and say "What the f...?" And that’s what makes it effective. It overshadows the other billboards and screams, "Look at me! I’m huge." And of course, like David to Goliath, all we could do was notice him completely. It didn’t matter what product was on it. You could put a picture of a plate of chicharon and you’d still have hundreds and even thousands of people looking at it’s towering bulk. Mission accomplished. Celebrities. You’ve got your man candy like Piolo Pascual and Richard Gutierrez making female knees weak. I wonder how many times girls have walked into a Max’s Fried Chicken restaurant, hoping to catch a glimpse of Piolo with a whole chicken on his chest. I’m sure they’ve seen Dingdong wear nothing but his tighty whities for Bench, and with angel wings too! For guys, you’ve got a healthy serving of flaming hot females like Angel Locsin and Marian Rivera. Maybe seeing Marian beam her perfect smile and her ample bosom will have guys lining up to buy units at SM Residences? Or cute Kim Chiu biking, doing takewondo, and shopping in an Enervon billboard while having a cartoonized shrunk body is a great way to sell multivitamins? But what about Mark Gil, Joey Marquez, Sharon Cuneta, and Vicky Belo? They’re not exactly part of the hip crowd. But their veteran status gives their billboard an air of credibility. Food. Sharon likes to eat McDo, Aga has his share of Chicken Joy from Jollibee, and Anne Curtis enjoys a plateful of lasagna from Greenwich. Chicken, burgers, spaghettis, pastas, cakes, and donuts. Every fast food joint, restaurant, and food product billboard always gets attention. Everybody gets hungry eventually. And seeing a fast food billboard showcasing its seemingly new package of crispy chicken wings does get your mouth watering and craving for it during lunchbreak. Every kilometer or so is loaded with obvious messages for you to eat. And you know you’ll do it. A sexy woman wear a skimpy outfit. Combined with either the celebrity element or the food element, a bikini-clad female definitely stops traffic and makes everybody’s pupils focus. You’d expect that most victims would be male. But a lot of ladies will peek at the billboard and often say "Nice bikini! Love it!" or "Oh my God, ang sexy niya!" You’ve got the Caucasian models strutting their butts and exposed bellybuttons for Von Dutch and Lee, that girl with the bikini top for Tomato, and even sexy celebrities like Katrina Halili showing her beautiful bod for Belo, or rather by Belo. Folded & Hung has a couple of two-piece clad Angel Locsin billboards that will cause any guy to stop and stare. Hopefully not causing any car crashes. There are always some oddball billboards that seem to defy and logic or level of taste. There were the infamous Ellen’s billboards in Cubao and that strange Vicky Belo billboard selling healthy oats-sometimes, the wrong combination of the elements just spells disaster. If we were to create the perfect billboard it would probably have a sexy bikini clad girl in the middle of a buffet with That’s Entertainment Tuesday Group as her guests. Maybe she’d have a large snake looped around her torso, too, just for kicks. Billboards will pretty much be on the road for decades to come. As long as people desire with their eyes and have money in their pockets, a billboard will be there like a siren to a weary seaman. It’s just up to you if you want to take a peek or just simply continue on your merry way. Image of Dingdong Dantes’ billboard from pep.ph.

Billboards
Your Guide to Thriving in This Strange New World
Staying
In? What to watch, what to eat, and where to shop from home
OR
Heading
Out? What you need to know to stay safe when heading out