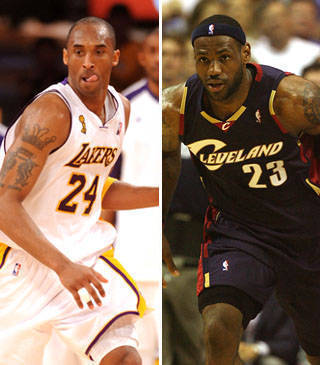 Top 10 Reasons Why Kobe is Better Than LeBron

The Kobe-LeBron showdown didn't happen on court, but that doesn't mean we can't pick sides. Here's SPOT.ph's take on why the Cavaliers probably would have lost.

This past NBA season saw LeBron James and Kobe Bryant leading their teams in the ultimate goal of winning a championship. Here are 10 reasons we think "The Black Mamba" is better than "King James".

10. Kobe can jump cars
LeBron might be the NBA's "Chosen One" and could carry the league for the next decade, but let's see him jump a speeding Aston Martin! Of course it's a camera trick, but you've got to admit… Kobe's got some serious hops. All LeBron's done in ads is throw chalk in the air.

9. Kobe can speak Italian
Having grown up in Italy (where his dad played professional basketball in the '80s), Kobe can speak fluent Italian. LeBron has said numerous times that he wants to be a "global icon", but does he even speak any other language but English? I didn't think so.

8. One is on the cover of a video game, the other isn't
For all of LeBron being like a living video game on the court, he's never been the cover of any video games. 2K Sports recently announced that Kobe will be the cover athlete for the next edition in their NBA series, NBA2K10, and fans can vote which Kobe pose they want featured. In the past, Kobe's been on the cover of other NBA video games like Kobe Bryant in NBA Courtside and NBA '07: Featuring the Life Vol. 2.

6. Kobe won the Slam Dunk title as a rookie
As part of his rookie season in 1997, Kobe competed in the Slam Dunk championship. Nobody had heard of him before, but after going between his legs, people took note of the skinny Lakers rookie. LeBron hasn't even tried joining the Slam Dunk contest. Even nobodies like Harold Miner, Kenny Walker, and Dee Brown have won Slam Dunk titles. What is LeBron afraid of?

5. LeBron wastes a lot of chalk
Before every game, LeBron gets some chalk on his hands and tosses it into the air. It supposedly helps him focus before the game. But come on, he actually just copied this from Michael Jordan who did a more subdued version years ago. Besides, chalk in the air is bad for the asthmatics in the crowd.

4. LeBron is a sore loser
After the Cavaliers were eliminated by the Orlando Magic in this year's Eastern Conference Finals, LeBron walked off the court without shaking hands with any of the Magic players, including Olympic teammate Dwight Howard. LeBron tried to explain that it was his competitiveness that prevented him from congratulating the Magic. Still, it's a pretty bad example from the NBA's new poster child.

3. Kobe has been to Manila two times. LeBron has never been here.
Kobe first came here in 1998 and played an exhibition game at the Araneta Coliseum. Not satisfied with that, "the Black Mamba" returned in 2007 for a promotional tour and even conducted a mini-basketball clinic at the Philsports Arena. Will LeBron even consider coming to Manila?

2. Kobe scored 81 points in a single game
One of the most unbelievable performances in NBA history occurred on January 22, 2006, when Kobe made 81 points in leading the Lakers to a 122-104 win against the Toronto Raptors. Using his entire offensive arsenal, Kobe shot the lights out on the way to the second highest scoring game in league history.

1. Kobe has three championship rings. LeBron has zero.
In the end, it all boils down to one thing: championships. Kobe won three titles with the Lakers in 2000, 2001 and 2002 (with a fourth title looming on the horizon). LeBron and the Cavaliers played in one NBA Finals back in 2007 and were promptly swept by the San Antonio Spurs. If you want to be considered among the best ever, you've got to win at least one title.

Kobe Bryant Lebron James Lakers Cavaliers Nba
Your Guide to Thriving in This Strange New World
Staying
In? What to watch, what to eat, and where to shop from home
OR
Heading
Out? What you need to know to stay safe when heading out