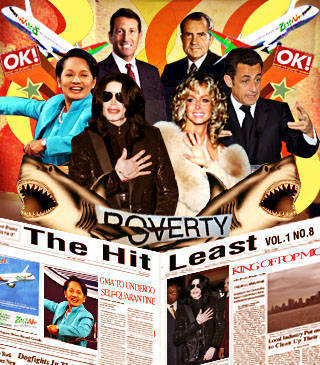 THE HIT LEAST #8: Last week's lowlights in the news

4. GMA TO UNDERGO SELF-QUARANTINE AFTER TRIPS TO JAPAN AND BRAZIL. If her political opponents had their way, she'd be in self-quarantine until after May 2010.

A round-up of the past week's lowlights in news and pop culture:

2. FRENCH PRESIDENT NICOLAS SARKOZY SAYS BURKAS SHOULD BE BANNED IN FRANCE FOR BEING SYMBOL OF DEBASEMENT, SPARKS INTERNATIONAL DEBATE. Leave it to the French to offer controversial fashion advice.

3. RELEASED WHITE HOUSE TAPES REVEAL RICHARD NIXON THOUGHT ABORTION WAS OKAY IF FETUS WAS A PRODUCT BETWEEN "A BLACK AND A WHITE." As "Tricky Dick" later justified to friends, "I'm only the Leader of the Free World. There's no way they're taping my phone conversations.

4. GMA TO UNDERGO SELF-QUARANTINE AFTER TRIPS TO JAPAN AND BRAZIL. If her political opponents had their way, she'd be in self-quarantine until after May 2010.

5. SOUTH CAROLINA GOVERNOR WHO WENT MISSING FOR A WEEK SAYS HE WENT HIKING IN THE APPALACHIANS, THEN ADMITS TO AFFAIR WITH WOMAN FROM BUENOS AIRES. Appalachia…Argentina…it's easy to get confused.

6. ZESTAIR PLANE OVERSHOOTS RUNWAY IN CATICLAN. I prefer zest in my salad dressing…not in my airline pilots.

7. AFTER TRYING TO SCARE ANTI-CON-ASS RALLYISTS WITH THE SPECTER OF FLU, CONGRESSMEN VENT IRE ON DOH FOR WITHHOLDING CAUSE OF BATASAN EMPOLYEE'S DEATH OF H1N1. In a related development, Con-Ass protesters jump out at Speaker Nograles and scream, "You've been punk'd!"

9. STUDY SAYS GREAT WHITE SHARKS HUNT LIKE SERIAL KILLERS. They have also been known to enjoy human livers with some fava beans and a nice Chianti.

10. IN ITS JULY ISSUE, OK! PHILIPPINES QUOTES SOURCE WHO SAYS THAT GEORGE CLOONEY DATES WAITRESSES BECAUSE "THE ONLY PERSON WHO'S GOING TO BE WITH HIM IS SOMEONE WHO ISN'T AFFECTED BY ALL [THE ATTENTION]." Or maybe George is a handsome tightwad who'd rather give tips than jewelry.

Hit Least Andrew Paredes Michael Jackson Ok Gma Gloria Macapagal Arroyo Lowlights Headlines President Gloria Farrah Fawcett Sharks George Clooney Ok Magazine Quarantine Nixon Richard Nixon Sarkozy President Nicholas Sarkozy Nicolas Sarkozy Burka
Your Guide to Thriving in This Strange New World
Staying
In? What to watch, what to eat, and where to shop from home
OR
Heading
Out? What you need to know to stay safe when heading out