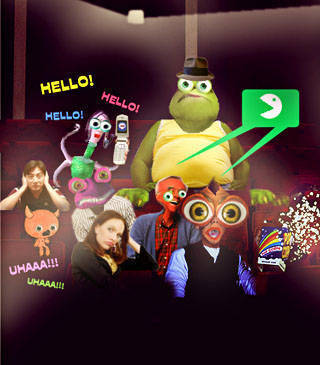 Those Movie Monsters In Front of the Big Screen

Recognize any of them? Or are you one of them? Spot.ph collected the most irksome, most uncivilized kinds of behavior we put up with at the cinema–and gives you tips on how to deal. 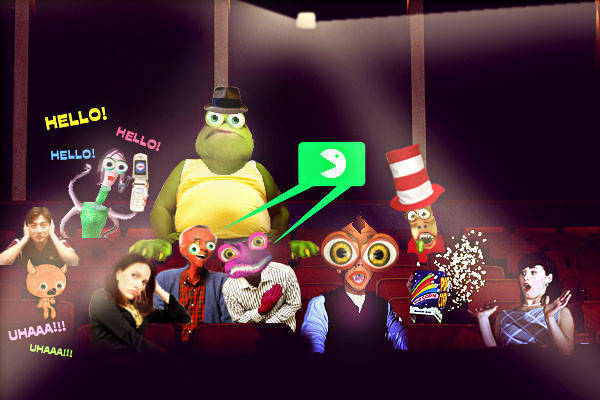 The lights go out, the movie starts, excitement builds up on the big screen… then, suddenly, Shake shake! Tap tap! Click-click! Yakity-yakity-yak! What the…

Spot.ph collected the most irksome, the most uncivilized kinds of behavior we put up with at the cinema–and gives you tips on how to deal. Or are you guilty yourself?

1. Talking as the movie's playing
A few remarks here and there are acceptable. But to actually have a discussion as if the entire cinema is your own private home theater is unforgivable. Other people are watching. WATCHING. Those thinking out loud and asking the stupidest questions either to look good or sound smart should be shot too. But before it gets to that point, a courteous shhhhhh or a polite, "Excuse me, but please be quiet," should do the trick. If that fails, lay on the cussing.

2. Bringing babies (!) and kids to rated PG-13-and-above films.
These grownups(?) think they're spending quality time with the kiddies. Seriously now. Quality time watching robots blow up the world, people swapping spit, and blood gushing out of a severed hand? Yep. Better than Barney, you tell me. Their Energizer bunnies are impossible to keep still so unless they're precocious little geniuses to whom things can be explained properly, don't bring them along. Find another row if a rambunctious underage brood sits next to you. You'll be thankful you did.

3. Yes, using the cellphone in the theater. In 2009.
The movie magic experience is ruined for people close to the idiot who didn't switch to silent mode, texts, makes and takes a call on his phone so, it is people's business. The blinding spot of light, the audible ring tone, and the forced-to-hear dialogue are so distracting that physical assault on the perpetrator is almost justified. Really now, is it too much to set it to vibrate? Or wait to reply after the movie ends? Of course, the usual exceptions apply: emergencies, urgent matters and such.That said, take the call outside.

4. Repeatedly hitting the seat in front of you.
Once, twice, thrice is still fine, but by golly, if it's rhythmic tapping and kicking, war is upon the inconsiderate perp who can't control his, pardon my French, jerking around. It's like a broken tap that keeps you awake at night or like Bart Simpson on a long road trip saying, "Are we there yet? Are we there yet?" Long legs are not an excuse. As always, politely tell the juvenile delinquent to stop it and pray it works.

5. Person in the front of you sits up too high
Stadium seating's the best but even that won't entirely clear the view of the screen. So, when someone sits up like a friggin' flagpole, what's left to see? If you're worried about posture, dude, take the seats with a wall behind. But then there are those burly people who can't help it if they're built that way. Save yourself the unnecessary annoyance and move to a seat that has an unobstructed view. If the theater's packed, sucks to be you.

6. Spitting, making out, jerking off and other gross conduct in the cinema
Movie theaters are for watching and enjoying movies. There's an appropriate time and place for other things. Simple manners, people! It's a travesty that people think these appalling actions are okay to do inside a movie house. Hardcore PDA-engaging couples should be booed out, spitters scolded, and wankers reported immediately to authorities. Show no mercy!

7. Obtrusively coming in and out of the aisles
Okay, going to the loo is necessary and unavoidable. But do you have to worm your way back when the good stuff is happening? Timing is key. A dull scene is just the right moment to make your entrance. Latecomers are distracting, too. It's hard not to complain but just give them space to walk through so it'll be over and done with. No tripping!

8. Litterbugs, er, pigs
There are janitors who clean up after every showing but some people can be really careless with their food and drink. Or plain and simple, they're just pigs. Come on, oinkers, think of the theater as if it were your own place! Disposing of your own trash properly is basic courtesy–to others and to Mother Earth. Picking up after a sloppy person makes us want to scream. And yes, when we see you litter, we do judge you and the way you were brought up. Harshly. Tip for us victims: Don't let your bag touch the floor. Nasty stuff down there. Nasty!

9. Laughing too loud
Talk about taking the fun out of a good joke. It's okay. Relax. Everybody got the punch line. There's no need to stress the obvious and let out a blaring guffaw. Sometimes there are those who even explain the scene out loud and why it's so funny. Sheesh. Give those hyenas the stink eye, be my guest.

10. Noisy munching and eating smelly food
Blocking out two distractions at the same time is no easy feat, so pity to the unfortunate seatmate who has to endure these assaults to the senses. Hang in there, buddy. It too shall pass. Soon, the chips will be gone and you'll get used to the stench eventually. If not, let one rip and innocently bask in all your glorious flatulence. Right back at them. *wink!*

SPOT.ph wants to know: What are your top peeves at the movie theater?

Movies Movie Monsters Nerd List
Your Guide to Thriving in This Strange New World
Staying
In? What to watch, what to eat, and where to shop from home
OR
Heading
Out? What you need to know to stay safe when heading out