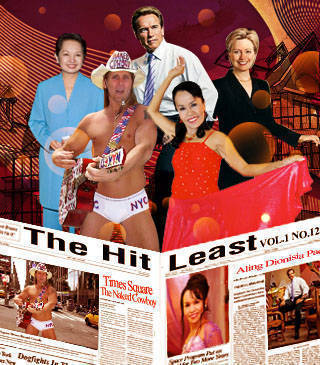 THE HIT LEAST #12: Last Week's Lowlights in the News

1. GLORIA: "AS LONG AS I HAVE THE PEOPLE OF PAMPANGA, I DON'T NEED TO BE POPULAR." How bad does an administration have to be to invoke the "a-President-only-a-Cabalen-can- love" defense? By Andrew Paredes

1. GLORIA: "AS LONG AS I HAVE THE PEOPLE OF PAMPANGA, I DON'T NEED TO BE POPULAR." How bad does an administration have to be to invoke the "a-President-only-a-Cabalen-can-love" defense?

2. PAMPANGA GOV. ED PANLILIO SAYS GOD WANTS HIM TO RUN FOR PRESIDENT IN 2010. In a related development, PAGASA has spotted a cloud of crazy hovering over Cabalen country.

7. HILARY CLINTON SAYS NORTH KOREA HAS "NO FRIENDS;" NORTH KOREAN ENVOY CALLS CLINTON A "VERY FUNNY LADY" WHO IS "NOT VERY INTELLIGENT." When nuclear disarmament talks being to resemble a kindergarten playground, be afraid. Be very afraid.

9. TACO BELL CHIHUAHUA DIES. At his memorial, Lassie and Rin Tin Tin credit themselves for recognizing his genius early, while his family bickers over who gets to raise his litter.

10. ALING DIONISIA TELLS ABS-CBN SHE WANTS TO BE PIOLO PASCUAL'S NEXT LEADING LADY. Star Cinema executives are said to be mulling Pinoy remakes of Harold and Maude, The Graduate, and Misery.