Spotted on Twitter: "Ang dinig ata ni Legarda eh Sauna hindi SONA."
Here's what that Tweet must have been referring to: 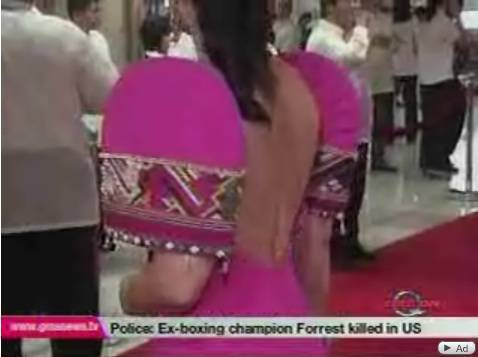 To see News on Q's video on the fashion and political statements at the SONA click here. Sen. Loren Legarda stole the limelight at the State of the Nation Address yesterday wearing a low-cut backless fuchsia terno by Paul Cabral adorned with beads made in Mindanao. Not only did the dress bare her back, it had a mid-thigh slit at the back. 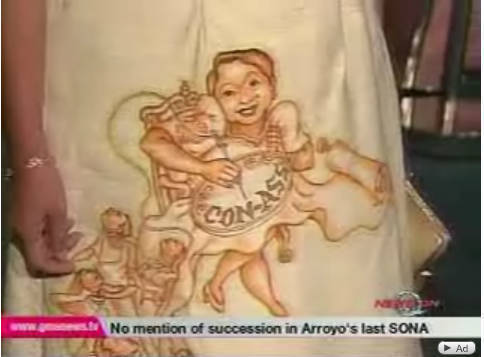 Gabriela Rep. Liza Masa wore her sentiments on her skirt, which was hand-painted by social realist Boy Dominguez showing a grinning President Arroyo sewing a gold CON-ASS sampler with its threads strangling the necks of the poor. She said she spent less than a thousand pesos for her flour-sack couture, which she was meaning to turn into curtains. "Ang message, natutuwa siya habang nahihirapan naman yung mas maraming mamamayan," reported GMANews.tv.

Sen. Pia Cayetano wore a modernized black and white terno by Mia Urquico. "Be black or be white. No in between," was her statement. 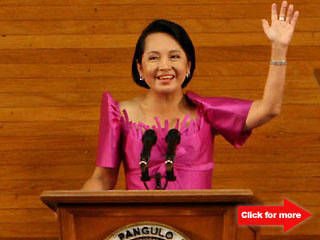 President Arroyo in an Inno Sotto terno. Photo from gmanews.tv.

As for the real star of the occasion, President Arroyo wore a fuchsia terno by Inno Sotto with what looked like strips of fabric accentuating a body part which was not too long ago the subject of a health/cosmetic surgery controversy--her chest. Her gown was christened "French Fry Chic" all over cyberspace as her SONA speech unfolded yesterday.

SPOT.ph wants to know: Is it appropriate to turn the SONA into the Oscars? Or: Whose outfit did you love or hate?