"National Artist Brouhaha: Not if we can help it"-Carlos Siguion Reyna
Loading
Already a member? Log in
No account yet? Create Account
Spot.ph is your one-stop urban lifestyle guide to the best of Manila. 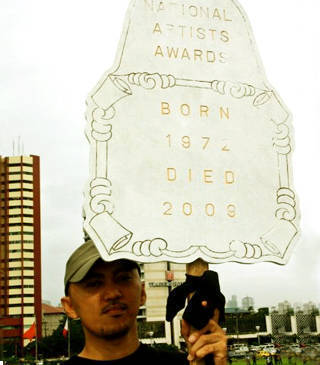 "National Artist Brouhaha: Not if we can help it"-Carlos Siguion Reyna

Award-winning director Carlos Siguion Reyna was at the Artists' Rally at the CCP yesterday. He tells SPOT.ph what he saw, felt and wants to say. 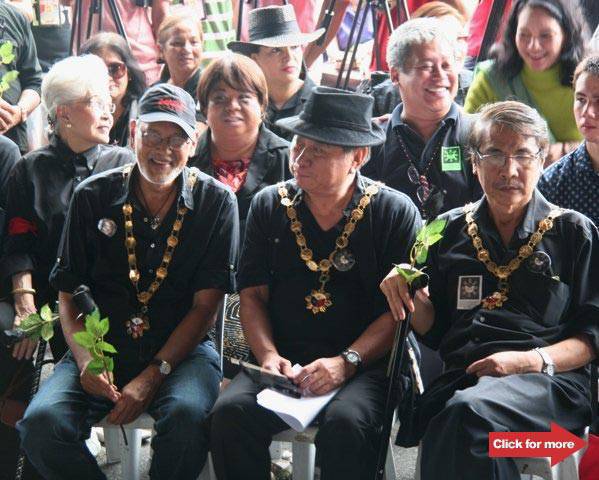 The Necrological Service for the National Artist Awards (Pagdadalamhati ng Bayan para sa Gawad Pambansang Alagad ng Sining), held Friday, August 7, 2 p.m. at the main ramp of the Cultural Center of the Philippines (CCP) turned out an unprecedented large gathering of the country's leading artists of music, dance, literature, cinema, theater, and the visual arts protesting Malacanang's subversion of the awards selection process for purposes of political accommodation of a preferred few. With sympathizers from the academe and media, patrons of the arts, supporters from militant and party-list organizations, student groups, the action numbered about 700 participants, mostly wearing black to signify mourning.

I miss out on some names; the omission is not intentional. With media interviews conducted left and right, it was a tough choice between finding out who else was there and working to get the message across.

The protest was galvanized by the general perception that the awards selection process had been politically compromised. As nominated and selected by arts organizations and the joint boards of the CCP and the National Commission for Culture and the Arts (NCCA), the legitimately chosen National Artist Awards honorees of 2009 were Manuel Conde (cinema), Lazaro Francisco (literature), Federico Aguilar Alcuaz (visual arts) and Ramon Santos (music). This list was forwarded to Malacañang for Mrs. Gloria Macapagal Arroyo's signature, and that's when the massacre took place. 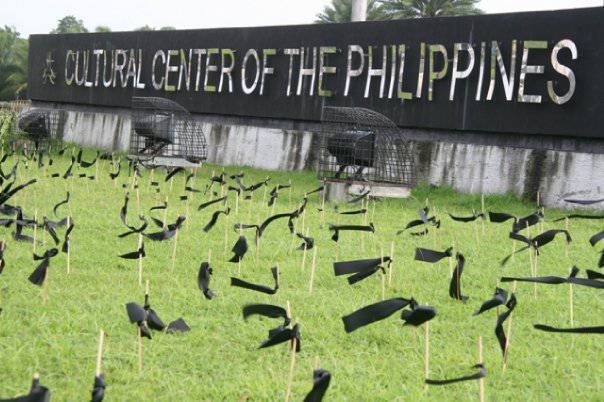 Black ribbons signify the death of the National Artist Awards. Photo by Illac Diaz
The Palace's subsequent awards announcement dropped Santos from the original roster of four, no matter that he had placed second in the deliberations, and added four others–Cecile Guidote-Alvarez, Carlo J. Caparas, Jose "Pitoy" Moreno, and Francisco Mañosa–despite their failure to pass the rigorous three-level NCCA/CCP selection process, and despite Guidote-Alvarez's position as NCCA Executive Director legally disqualifying her selection.

Malacañang spin-doctors Cerge Remonde and Anthony Golez claimed Guidote-Alvarez, Caparas, Moreno and Mañosa were nominated and recommended for the awards by anonymous members of a mysterious "honors committee" – the make-up of which they could not identify.

As of this writing, Moreno and Mañosa have wisely refrained from publicly commenting on the controversy. But Guidote-Alvarez and Carlo Caparas pushed the matter to scandalous proportions, with their defense: Guidote-Alvarez insisting she was "not an idiot" before she got the recognition, and Caparas maintaining this is nothing but a class war, high art vs. popular art: "Ayaw nila sa akin kasi elitista sila, ako, maka-masa. Sabi ni Sionil-Jose, nagwo-walk-out siya sa sine ko, e bawat walk-out niya, milyon ang pumapasok."

Friday's protest action started with Bituin Escalante's rendition of Lupang Hinirang. A procession led by a funeral wreath embracing the awards logo and followed by seven women representing the seven arts honored by the awards–dressed from head to toe in black–progressed from the bottom of the ramp in front of the CCP Building all the way to the top, to meet protesters stationed just in front of the main doors. 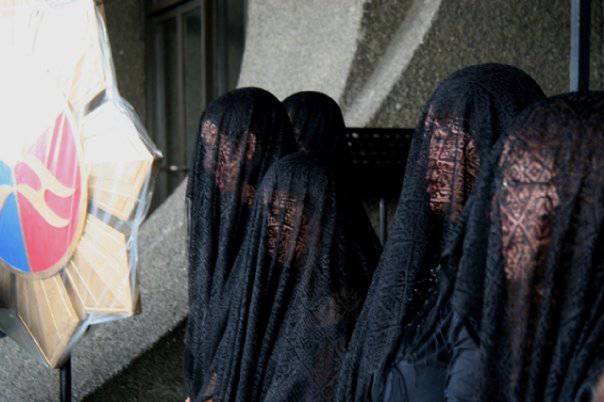 Salvador Bernal delivered introductory remarks reviewing the purpose of the artists' gathering, after which Benedicto Cabrera spoke on the spirit and value of the National Artist Awards. Cellist Renato Lucas played a mournful rendition of Bach's Sarabande from the Fifth Suite–a protest piece often played in the past by Pablo Casals against Generalissimo Francisco Franco. Virgilio Almario and a chorus of mourners then interacted in a prayer ritual lamenting the debasement of the awards. Celeste Legaspi delivered one of National Artist Amado V. Hernandez's famous poems, as adapted for the occasion and retitled Kung Tuyo na ang Luha Mo, Aking Sining.

A satirical monologue entitled, National Artist na Ako! Have Mercy on Us!, written by Rody Vera was performed by "Juana Change." In the sketch, Juana castigated the protesters for envying her acquisition of National Artist honors, but generously advised the crowd on how to secure the award through the most unscrupulous means. Next came Bienvenido Lumbera's call for conviction to stand against the violation of the spirit of the awards.

The National Artists in attendance dramatically removed medallion-necklaces they symbolically put back in storage boxes for safekeeping at the CCP, until such time current issues motivating the protest are resolved.

The CCP portion of the event ended to great applause. It segued to a motorcade that proceeded to the NCCA in Intramuros, where–amidst a noise barrage sustained by the funeral vehicles–motorcade participants laid the funeral wreath in front of the NCCA building. Shortly after, a shouting match erupted between Guidote-Alvarez supporter Angie Ferro and the rallyists, a footnote we heard about only when we got home.

Not even the screaming of a boor can stop the principled.

Ccp Carlitos Carlo J Caparas National Artist Carlos Siguion Reyna Carlitos Siguion Reyna Ccp Rally Necrological Services Death Of Nationa Cecile Guidote Alvarezl Artist
Your Guide to Thriving in This Strange New World
Staying
In? What to watch, what to eat, and where to shop from home
OR
Heading
Out? What you need to know to stay safe when heading out