Arroyo getting rich faster than 3 presidents before her; Malacañang says she's just being transparent
Loading
Already a member? Log in
No account yet? Create Account
Spot.ph is your one-stop urban lifestyle guide to the best of Manila.

Arroyo getting rich faster than 3 presidents before her; Malacañang says she's just being transparent

According to   gmanews.tv, reports from the Philippine Center for Investigative Journalism (PCIJ) in 2000 show President Gloria Macapagal Arroyo's "declared wealth as growing faster, and by amounts much bigger, than the combined growth in the declared wealth of three presidents before her (Aquino, Ramos and Estrada)."

In her last State of the Nation address, she said, "I am falsely accused, without proof, of using my position for personal profit."

The gmanews.tv report by veteran investigative journalist Malou Mangahas plotted Arroyo's statements of assets, liabilities, and net worth from 17 years ago when she first served as senator, and found out that her declared wealth grew exponentially by 2,000 percent. Read the full report here. 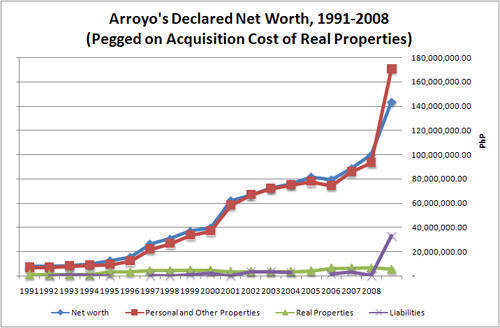 Remonde attributed the rapid increase in President Arroyo's wealth to real estate investments made by herself and her husband Jose Miguel Arroyo that soared in boom market of the last ten years . "At alam ng lahat ang pamilya ng FG (First Gentleman) belongs to the landed gentry," Remomde said.

Arroyo Pcij Politics
Your Guide to Thriving in This Strange New World
Staying
In? What to watch, what to eat, and where to shop from home
OR
Heading
Out? What you need to know to stay safe when heading out