La Salle vs. Ateneo: Scream Animo or Fabilioh August 16 at the Big Dome
Loading
Already a member? Log in
No account yet? Create Account
Spot.ph is your one-stop urban lifestyle guide to the best of Manila. 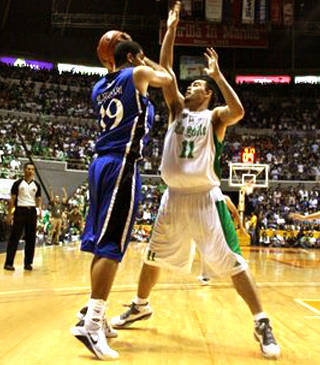 La Salle vs. Ateneo: Scream Animo or Fabilioh August 16 at the Big Dome 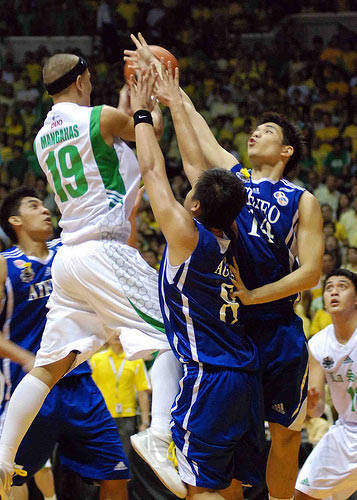 Ateneo versus La Salle at the first round of UAAP Season 72
Photo by Joseph Nebrida of inboundpass.com

Blue and green (sans Cory yellow) will dominate the Araneta Coliseum this Sunday anew, just a week after the Ateneo Blue Eagles beat archrival La Salle Green Archers, 76-72, in the first round of the UAAP men’s basketball tournament. Usually held at the end of the second round, the second ADMU-DLSU game will be held on August 16 at 5 p.m. instead because of the first-round rankings.

"Didn’t we just play [DLSU]?" asked Ateneo coach Norman Black. "Emotionally, it’s so difficult to do what they’re asking us to do, to play La Salle on a Sunday then come back and play them again on another Sunday... We’re just going to have to find a way to get back up again for Sunday’s game," he told SPOT.ph.

"Usual game din ’yun; normally, we really prepare for each game," La Salle coach Franz Pumaren said. "[The loss against AdU] is going to have a special effect on our team standing because we went down to four [wins] and four [losses]. Hopefully we can bounce back."

"That’s the thing; you can’t really judge another game by another game," Black said. "That’s the way basketball goes. Different match-ups create different stories and different games. It’s going to be tough because they lost today so they’ll be trying to bounce back. But as a team, we continue to try to look for consistent, good 40 minutes," he revealed.

"To get to the final four is our main objective right now; it’s to be competitive," Pumaren said. Black seems to have bigger plans for his team: "At this point in the season, it’s all about winning. We’re still trying to reach our goal which is to make it to the top two," Black said. 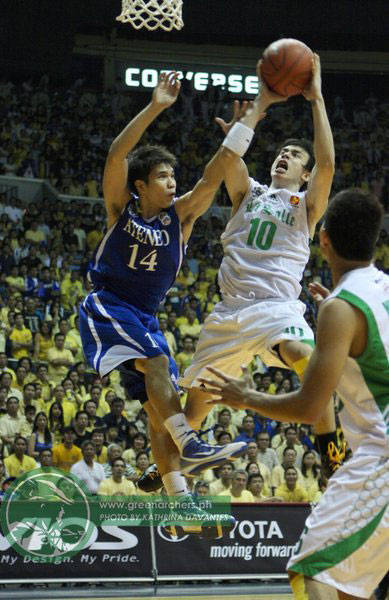 Joshua Webb of La Salle against Nico Salva of Ateneo
Photo from greenarchers.ph

Rabeh Al-Hussaini of Ateneo sprained his ankle in the first ADMU-DLSU game last Sunday, but yesterday, August 13, he looked fully recovered as he scored season-high 30 points in the game versus UE. Said Black about Al-Hussaini, yesterday’s Best Player: "I’m happy for him. He’s been struggling... It’s not just because of himself but also the defense that most teams have been putting up against him."

Meanwhile, it was the non-veterans of La Salle who scored the most for the past two games. Rookie Arvie Bringas scored career-high 21 points in the double overtime UST game last August 2, while sophomore forward Joshua Webb scored a career-high 26 points in the overtime ADMU game last Sunday. However in the AdU game yesterday, Bringas scored only two points and Webb, three points.

Joshua Webb, the grandson of Philippine Basketball Association great Freddie Webb, kicked Ateneo player Bacon Austria in last Sunday’s game after Austria fouled Webb. Webb was slapped with an unsportsmanlike foul, which resulted in booing as well as applause from the audience when the fouls were called.

"Obviously, we have to try to defend Webb a lot better because I think he’s the main one you’re talking about," Black said.

Tickets to the Sunday game are available at La Salle, Ateneo and the Araneta ticket booths. The Araneta ticket booth sells tickets at around 12 p.m. on Sunday, according to UAAP media relations group Larc and Asset. Tickets for the AdU-UE game at 2 p.m. and ADMU-DLSU game at 5 p.m. will be sold separately.

SPOT.ph wants to know: Who will you be rooting for on August 16?

La Salle Ateneo Uaap Sports Basketball
Your Guide to Thriving in This Strange New World
Staying
In? What to watch, what to eat, and where to shop from home
OR
Heading
Out? What you need to know to stay safe when heading out