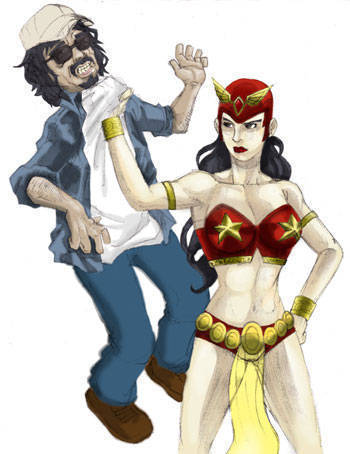 Read the full statement below:

CJC: The Man That He Is Not

Revered
Right now, the late Cory Aquino is the most revered person in our nation. Opposite this, Carlo Caparas probably is the most ridiculed and reviled.

Even before this National Artist brouhaha, as children of the late Mars Ravelo, we've long been observing the moves of this man in silence. Until Manoling Morato, Caparas' patron and staunch supporter, started wagging that notable tongue of his against our father. Now, we're breaking that silence.

Thru dubious press releases, Carlo Caparas proclaimed himself the Komiks King. A title which, we know Caparas very well knows, belongs to Mars Ravelo. Mars Ravelo earned it thru the merits of his work. It's a title that grew on him thru the years. It has become synonymous with his name. One day, Caparas, brazenly grabbed it for himself. Just like that. And it's not even up for grabs.

Later, after the announcement of his noble act of resurrecting the komiks industry, about four comics strips in the Philippine Daily Inquirer were cancelled to give way to his own diario novela.

Meritorious
Next came the various awards. Caparas becomes multi-awarded. He was even conferred a peace prize award (we hope not for his massacre movies), together with a pool of international dignitaries as co-awardees including a former Philippine president.

Morato is the president of the foundation which conferred the award. 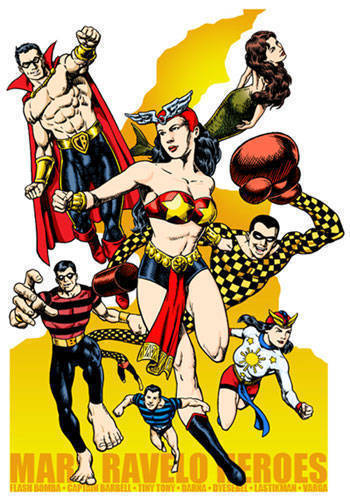 Komiks Legend
One day, one of our siblings texted us: Dad to be given an award at Malacañang tomorrow at 11 am. Sino ang pupunta?

Huh? Did we read right? An award from the palace and we were just advised the night before? We were not even given enough time for the dry cleaner. Did they really want our presence there?

And then we learned that together with Mars Ravelo, Tony Velasquez, Larry Alcala, and Francisco Coching, Caparas is also to be awarded the Presidential Medal of Merit. Seeing the line-up, we can hear ourselves singing (again) with Ate Isay: Alin, alin, alin ang naiba. Isipin kung alin ang naiba...

We decided, without second thought, not to go to the palace to receive the award on our father's behalf. Not only because it sucks of insincerity but seeing the dark side of it, our father, together with the other honorees who are all komiks legends, is being used to elevate Caparas into their league. Caparas may be legendary, but that's another story.

True Man
Caparas said he was aware of the criticism that his victory had bypassed such komiks legends as Mars Ravelo, Francisco V. Coching, Tony Velasquez and Larry Alcala.

"But they were my fellow recipients of the Presidential Medal of Merit in 2007. In any case, I am representing other komiks novelists and artists with this honor. I believe I was given this award because I was able to cross over from komiks to movies and TV."
Palace choices of 4 nat'l artists protested By Kristine L. Alave, Bayani San Diego Jr. Philippine Daily Inquirer First Posted 09:44:00 08/01/2009

Carlo Caparas can never represent these artists. Tony Velasquez, Larry Alcala, Francisco Coching and our father are komiks legends not as a result of a grand design but because of hard work, extraordinary talent and true passion for komiks. Caparas represents something else.

The belief of Caparas that he was conferred the NAA title because he was able to cross over from komiks to film and television is evident that Caparas does not understand the real meaning of this award. Ilang beses na niyang hinuhulaan kung bakit siya nanalo, hindi pa rin niya mahula-hulaan. It also tells a lot about how oblivious he is to his fellow komiks artists' achievements and plight. Or, he just simply don't care.

We can almost hear Caparas' torment echoing within his being. The uproar that is torturing him now. Why are so many people up in arms against him? Why are his fellow artists, particularly from the komiks and film sector not with him in his darkest hour?

All Caparas' camp's efforts from collecting awards, to grabbing and inventing all titles imaginable for him, to all the press releases meant to extol his legendary image are supposed to culminate to the National Artist title. Caparas' camp may have made certain that their contender will meet the list of criteria for the National Artist Award, at all cost. But the last criterion in the list was impossible to circumvent. It may be the last, but it is undoubtedly, not the least–respect and esteem from peers.

Mr. Caparas, try to find the exit door from that pseudo world of yours. It's the only way you can free yourself of all your misery and pain right now. Don't allow the Christofs in your life to tell you what to think and say. It's a matter of being able to come to terms with yourself. Truman Burbank found his exit door just in time.

To our father, you can stop turning in your grave now. Tell your friends Tony, Larry and Francisco, it went pffft.

Carlo J Caparas National Artist Award Mars Ravelo
Your Guide to Thriving in This Strange New World
Staying
In? What to watch, what to eat, and where to shop from home
OR
Heading
Out? What you need to know to stay safe when heading out