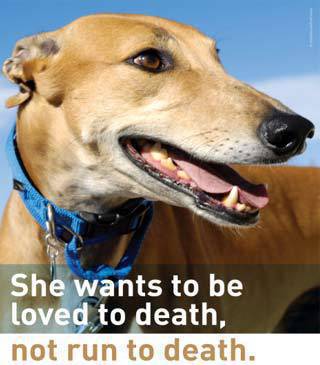 PETA and PAWS: No to Greyhound Racing in the Philippines

Animal rights groups PETA and PAWS are crusading to save dogs from a proposed bill that would allow greyhound racing in Cebu and Luzon.

Animal rights groups People for the Ethical Treatment of Animals (PETA) and the Philippine Animal Welfare Society (PAWS) are denouncing moves to allow a bill that will legalize greyhound racing in Cebu, Tarlac, Pampanga, and Laguna. PETA's recently-launched ad campaign, with the tagline "She Wants to Be Loved to Death, Not Run to Death," aims to educate people about the hundreds of dogs who will suffer once House Bills 5291 and 5648 are approved.

"Greyhound racing is a dying industry–in more ways than one," says PETA Asia Campaigns Manager Rochelle R. Regodon. "If approved, these bills will doom thousands of greyhounds to a miserable existence and violent death. If the industry–or anyone else–says otherwise, they are lying. Greyhound racing is opposed by every animal welfare group in the country and has no place in the Philippines."

According to PETA, greyhound racing is so cruel that it has been banned in 34 U.S. states. When they are not racing or training, racing greyhounds are kept muzzled and confined to cramped cages. Many dogs who are not "culled" as puppies die prematurely from injuries and illnesses, such as broken legs, heatstroke, and heart attacks. Other reported injuries include spontaneous seizures, sudden collapse before or after racing, spinal cord paralysis, severed tails, lacerated eyes, puncture wounds, and broken necks.

On July 30, PAWS submitted a position paper to the Senate outlining their opposition to the proposed bills and started campaigning for people to appeal to other lawmakers to vote against the bills. Senators Aquilino Pimentel Jr., Senator Mar Roxas, Senator Benigno "Noynoy" Aquino III and Senator Alan Peter Cayetano readily expressed their support to lobby against greyhound racing.

Pimentel agreed that, "Greyhound racing will only undermine the efforts of government and society to promote animal welfare." In a press release, he said that there are already too many kinds of gambling in the country. "I think it is a wrong policy to entice the people to bet their hard-earned money in gambling. It creates the false notion that they can improve their lives [through gambling]." 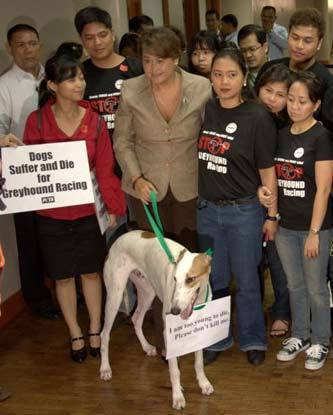 PETA also teamed up with Senator Maria Ana "Jamby" Madrigal, with her dog, Prasad, to urge senators to vote "no" to the cruel bill.   Madrigal's eight month old Prasad dramatized the plight of abused dogs during PAWS' visit to the Senate last July.

The House bills, which would permit greyhound racetracks to be built, are reportedly supported by Senator Bong Revilla Jr. His committee recommended the approval of HB 5291 without amendment. House Bill 5921 was authored by Representative Ben-hur L. Salimbangon (4th District of Cebu), while House Bill 5648 was authored by Representative Eleandro Madrona (District of Romblon).

The House of Representatives suspended on September 8 its approval of a greyhound racing franchise after PAWS and PETA launched their protest.

Click here to read about PAWS'opposition to greyhound racing in the Philippines.

Click here to join the online petition site against to greyhound racing in the Philippines.