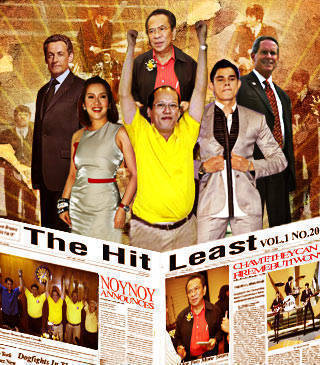 THE HIT LEAST #20: Your Cheat Sheet to the Hit Headlines

A roundup of the past week's lowlights in news and pop culture, by ANDREW PAREDES

1.       NOYNOY ANNOUNCES RUN FOR THE PRESIDENCY; FELLOW CANDIDATES WAIT TO SEE IF HE HAS INHERITED "CORY MAGIC." I love it that local politicians are treating this election like an episode of Criss Angel Mindfreak.

3.       HOUSE COMMITTEE APPROVES BILL TO TAX TEXT MESSAGES. Copy this news item and text to your congressman. Tell him he has to pass it on to 20 colleagues. Tell him if he breaks the chain he won't get reelected. You will feel the thrill of revenge almost immediately.

4.       RICHARD GUTIERREZ REPORTEDLY HAPPY ABOUT RECEPTION TO HIS DOCUMENTARY ON THE ENVIRONMENT. Richard is so conscious about the environment, he picked a post to crash his car into.

5.       OMBUDSMAN PLANS TO RESTRICT PUBLIC ACCESS TO GOVERNMENT OFFICIALS' STATEMENT OF ASSETS, LIABILITIES, AND NET WORTH; MIKEY CHARGED WITH GRAFT. Maybe the Ombudsman should be charged too. For stupidity.

6.       REPUBLICAN CONGRESSMAN JOE WILSON SHOUTS "YOU LIE!" DURING OBAMA HEALTH CARE SPEECH.
Can you imagine if this had happened during GMA's State of the Nation Address? That SONA would have lasted three days.

7.       NICHOLAS SARKOZY CAMP CALLS CLAIMS THAT HE PICKED ONLY SHORT PEOPLE TO STAND BESIDE HIM DURING VISIT TO AUTO FACTORY "ABSURD." The French President should take a cue from GMA. Eating at Le Cirque while most of her countrymen are starving, her eldest son unable to explain his mysterious wealth, looking like an Oompa Loompa in pictures…it's obvious Gloria just doesn't care anymore.

8.       KRIS WANTS TO GIVE NOYNOY A MAKEOVER; TIM YAP PLASTERS NOYNOY'S FACE OVER MALE MODELS' BODIES IN THE PHILIPPINE STAR. News items like this are what make politics and fashion so respectable in this country.

9.       CONSERVATIVE CALIFORNIA ASSEMBLYMAN KILLS CAREER BY INADVERTENTLY TALKING ABOUT SEXUAL ESCAPADES INTO AN OPEN MIC. Well, it's cheaper than making a sex video.