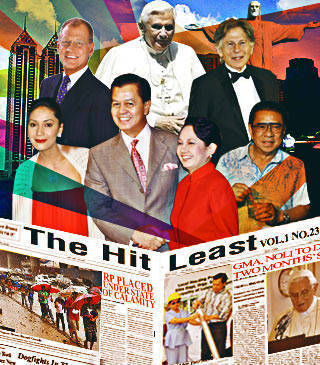 THE HIT LEAST #23: Your Cheat Sheet to the Hit Headlines

RP PLACED UNDER STATE OF CALAMITY. When has it ever not been in a state of calamity? BY ANDREW PAREDES

1.       RP PLACED UNDER STATE OF CALAMITY. Although to be honest…when has it ever not been in a state of calamity?

2.       TYPHOON PEPENG BEARS DOWN ON COUNTRY ONE WEEK AFTER ONDOY. Officials say Ondoy taught them a lot of things. Which means Pepeng is a pop quiz.

3.       GMA, NOLI, CABINET MEMBERS TO DONATE TWO MONTHS' SALARY TO VICTIMS OF ONDOY. After all the crap this government has fed us? That's not a donation–it's a down payment!

4.       PRESIDENTIABLES STICK THEIR FACES ON RELIEF GOODS STUBS, STICK THEIR NAMES ON PACK LUNCHES FOR DISASTER VICTIMS. Just to remind us of how disastrous it would be to vote for them.

5.       TWO EARTHQUAKES AND A TSUNAMI HIT SAMOA; TWO EARTHQUAKES HIT INDONESIA.
And two typhoons hit the Philippines in the space of a week–God, are You trying to tell us something?

6.       ROMAN POLANSKI ARRESTED IN ZURICH OVER THREE DECADE-OLD RAPE CASE, EVEN THOUGH THE VICTIM HAS ALREADY GONE ON RECORD TO SAY SHE WANTS CASE SETTLED. Gosh, those Americans can sure hold a grudge.

7.       CHE WITHDRAWS COMPLAINT VERSUS CHAVIT; NADIA MONTENEGRO AND ANNABELLE RAMA SAY THEY WORKED FOR A RECONCILIATION. Remind me not to go on any dates fixed up by those two.

8.       DAVID LETTERMAN HEADS OFF BLACKMAIL ATTEMPT BY CONFESSING HE HAD SEX WITH FEMALE STAFFERS. If I were one of those female staffers, I'd pay that blackmailer myself.

9.       SPIDER CRAWLS OVER POPE BENEDICT DURING SPEECH IN PRAGUE. St. Francis of Assisi would be so proud.

Politics
Your Guide to Thriving in This Strange New World
Staying
In? What to watch, what to eat, and where to shop from home
OR
Heading
Out? What you need to know to stay safe when heading out