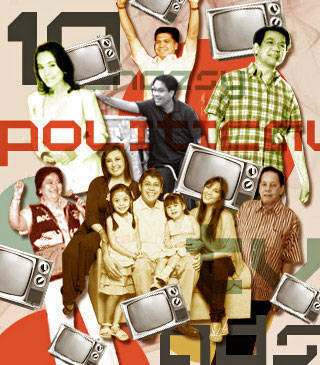 As the 2010 elections near, SPOT.ph recaps past and present political commercials that (we think) reek of cheese.

How to make cheesy (though memorable, we admit) political TV commercials: Start by butchering a classic or masa song and inserting the politician's name every five seconds. Put in clips of underprivileged communities and unkempt kids. Add the quintessential waving, hugging and smiling. Spice it up with any of the following: a ridiculous dance, a cameo of the politician's dead spouse/parent/any other relative, a pedicab or a bunch of celebrity endorsements. Garnish with the politician's slogan or theme song and serve.

For recipe variations, turn to the next page.

We dare say Sen. Mar Roxas is the current king of cheesy political commercials. From pedaling pedicabs for a boy who dreams of becoming a seaman to sympathizing with a crowd's troubles, we're expecting more dramatic stunts up the vice-presidential candidate's sleeve. Then again, there was his blockbuster wedding with broadcaster Korina Sanchez where one of the ninongs was Sanchez' ex-boyfriend and Roxas' running mate, Noynoy Aquino. If that isn't drama, we don't know what is.

So he thought he could dance. Manuel "Manny" Villar awkwardly moved his hips to a remake of the double entendre-laced song "Sasakyan Kita" by Gladys and the Boxers in his 2007 commercial. We don't know which one is worse, the painfully colorful original music video or Villar's sorry attempt to connect to the masses.

At least Villar's awkward moves paid off; he won with over 15 million votes, according to the COMELEC count. For the 2010 elections, he remade another song, Parokya ni Edgar's "Akala Mo."

So great is the charm of the only son of the late political icons Ninoy and Cory Aquino, and the clout of celebrity sister Kris, that two celebrities with ties to other presidentiables also appear in Noynoy's commercial: Boy Abunda, who previously appeared in commercials with Manny Villar, and Ai Ai delas Alas, who plays Joseph Estrada's wife in a movie now showing in theaters.

But wait, there's more! Kris says Toni Gonzaga, who plays Estrada's daughter in the same movie with Delas Alas, has signed on for part two of the celebrity-overloaded commercial. There's a part two? That, we'll definitely want to see.

We gotta admit, Frankie–or "Prankie" as Pangilinan says–is adorable in this commercial for the 2007 elections. The gurgling, incoherent Frankie almost distracted us from Pangilinan's blatant use of his child for political gimmickry. Almost.

His wife, actress Sharon Cuneta, announced the senator's 2010 vice presidential plans in May 2009 but he has since backed out to support his party's bids, Noynoy Aquino and Mar Roxas.

'Tol made us LOL. Mike Defensor tried to endear himself to the public with endorsements from Manny Pacquiao's impersonator, Pokyaw, as well as Ai-Ai delas Alas, Keanna Reeves, Erik Santos and Mariel Rodriguez, but failed to get a senatorial slot in 2007.

Defensor is now eyeing the Quezon City mayoral position. Maybe he should ask for an endorsement from Pacquiao himself this time.

From "Loren Loren Sinta" in 1998, she turned to Ariel Rivera's "Tunay na Ligaya" for the 2007 senatorial election, in which she ended up #1. We wonder how Ariel Rivera feels about his love song being turned into an ode to narcissism with these lyrics: "Iisa lang ang hinihintay niyong kasagutan/Sa senado'y muling makapiling siya/Siya lang ang tunay na pag-asa/Tanging si Loren lang/Kung sa sipag at talino lang naman/Tanging si Loren lang."

Legarda recently announced her candidacy for vice president in 2010. Which song is she going to use next?

Two years after her husband Raul Roco's death, Sonia Roco ran for the 2007 senatorial election. We expected her to include her husband, who ran and lost in the 1998 and 2004 presidential elections, in her campaign but we couldn't help but be a bit creeped out upon seeing them side by side in a TV ad. Husband or not, it's a little weird to have a dead guy campaign for her. Unfortunately, the third time was not the charm for the Roco couple.

Now, this one is stretching it: John Osmeña goes back three generations and has his grandfather and former president Sergio Osmeña campaign for him in the 2007 senatorial elections. More than a third of the commercial is devoted to Sergio's achievements and the voiceover doesn't even mention John's name. Is it an ad for Sergio or what? Too bad lolo just didn't rake in enough votes for John.

Panfilo "Ping" Lacson's 2007 commercial has the usual: a montage of farmers, kids studying and, of course, Lacson smiling and waving at people. His catchphrase: "Kapag may hope, may pag-asa." Funny when you first hear it, but HOPE actually stands for health, order, progress and education. Not the cigarette brand.

The former Philippine National Police chief regained his senatorial seat with the third highest number of votes, according to the COMELEC count. No commercial yet for the 2010 elections, though. Lacson withdrew from the 2010 presidential race in June 2009, because of "extremely limited resources."

Mar Roxas Korina Sanchez Manny Villar 2010 Elections Loren Legarda Noynoy Aquino Kiko Pangilinan Mike Defensor Sonia Roco John Osmena Tito Sotto Ping Lacson Commercial
Your Guide to Thriving in This Strange New World
Staying
In? What to watch, what to eat, and where to shop from home
OR
Heading
Out? What you need to know to stay safe when heading out