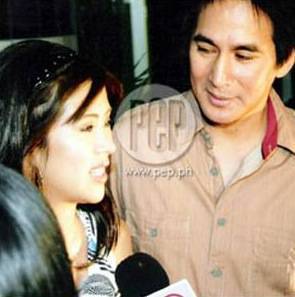 Former actor and political aspirant Mat Ranillo III, the father of starlet Krista Ranillo, has finally broken his silence by releasing an official statement to the press. Krista has been implicated in a highly controversial love triangle with international boxing champion Manny Paqcuiao and wife Jinkee. The statement mentions that the Ranillo family has been receiving death threats, which is why they have not yet returned to the Philippines:

Our family is deeply saddened by the continuing negative publicity being hurled upon us as a result of the alleged inappropriate relationship of Krista Ranillo with Manny Pacquiao. We are also extremely alarmed by the death threats that our family has received from some unknown individuals who are claiming that such inappropriate relationship exists.

We appeal to media to exercise balance, fairness and accuracy in their reporting.

Our family categorically denies that any inappropriate relationship exists between Pacquiao and Krista Ranillo. We thought that our silence will stop all these lies being peddled in the Philippine media by some unscrupulous people.

To protect our interest on this matter, we have engaged the services of Atty. Tonisito Umali, a Philippine and California lawyer, to serve as our counsel and spokesperson. We have also requested Umali to do the following:

1. Study all the negative publicity shown in Philippine TV talk shows and news programs and published in major newspapers to determine whether any of our rights as individuals are violated and/or whether such materials are considered unprotected speech or libelous.

2. Study the derogatory and untruthful comments made by Gina Alajar in her Facebook (and published in major newspapers and shown in major TV shows) and other media personalities to determine whether such comments are considered unprotected speech or libelous.

In response to the statement's accusation that her Facebook status post could possibly be libelous, according to   PEP.ph, veteran actress Gina Alajar replied: "I can say anything and everything in my profile. Nobody can stop me." In another interview Alajar stressed that she was merely dispensing "unsolicited advice" for Jinkee Pacquiao in her shoutout.

PEP.ph says the Ranillo family will release no other further statements "so as not to jeopardize our attorney's efforts to study the legal implications of this negative publicity to our individual rights."