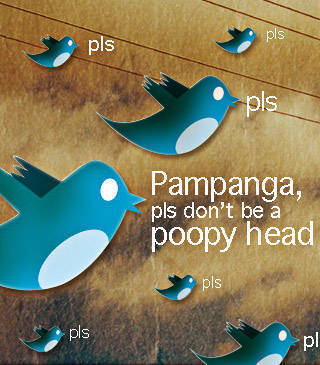 Tweets of the Week: Candidate Cheers and Jeers

Pepe Diokno has no respect for Randy David. Gloria makes Jim Paredes want to throw up. Kiko Pangilinan says GMA can run but she can't hide.

Mar Roxas, senator: officially a candidate once more! Umaasa ako na malinis, matuwid at matapat ang eleksyon
- I know it's difficult to accept promises from politicians but here are mine: hindi ko kayo lolokohin. I will not abuse your trust.
- I've kept these promises ever since and will continue to keep them. Ang kapakanan ninyo ang uunahin ko. Bayan bago sarili

Noynoy Aquino, senator: I just filed my COC at Comelec. Hope you find time to read our platform.

Pia Cayetano, senator: Left my bike outside, changed out of my bike outfit then filed my certificate of candidacy for senator.

Sunshine Cruz, actress and wife of Cesar "Buboy" Montano: Buboy filed coc here in Bohol this am.:) support all the way ako.

Paolo Paraiso, actor/model: i think gordon and fernando (team transformers) are worth considering in the coming elections

Kiko Pangilinan, senator: GMA can run, but she can't hide from responsibility for the scandals & controversies that hounded her years in office.

Pepe Diokno, award-winning director: OMG. Pampanga, pls dont be a poopy head RT @wwwgmanewstv Arroyo formally announcs bid 4 Congress seat in Pampanga http://tinyurl.com/ybazy7c
- I have absolutely no respect for Randy David. Not only is he a dilettante http://bit.ly/GNPa3, he is now also a coward http://bit.ly/5OsHPr

Jim Paredes, singer/songwriter: GMA running makes me throw up. She will be President as she campaigns. She may end up speaker of the house.What does Gibo or Lakas say?