The Juicy on Gusi: "First Pinoy model of Armani" and other claims
Loading
Already a member? Log in
No account yet? Create Account
Spot.ph is your one-stop urban lifestyle guide to the best of Manila. 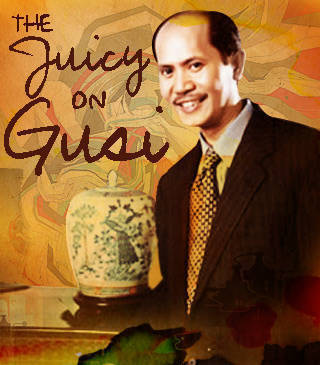 The Juicy on Gusi: "First Pinoy model of Armani" and other claims

Who is this man and why is he giving out awards? SPOT.ph.gives you the lowdown.

Since that hissy-fit video made its rounds online, people have been asking: Who is Barry Gusi and why was he so furious with Manny Pacquiao? SPOT.ph was able to dig up a March 2001 feature in Kabayan newspaper on the former ambassador, who has claimed that he was the first Filipino model for Armani:

In the feature from its "Buhay Pinoy" section, the newspaper reported that Gusi was the first Filipino model for world-renowned designer Giorgio Armani, aside from being a "commercial, print and ramp model in Europe." The article also said that Gusi was a judge in the Miss Guam World Beauty Pageant, Miss Australia, Miss Chile and Miss International Japan, and a human rights advocate in Korea, Japan, Australia, Saipan, Guam, USA and Germany. Many OFWs apparently asked him to help them report complaints and get better jobs. Because of his "kagalingan at kabutihan (skills and kindness)," he was featured in international publications like the Japan Times, International Greek Herald, Middle East Daily Telegraph, South China Morning Post, Sydney Daily News, India Today and Pacific Daily News, Kabayan reported.

RockEd Radio invited Gusi over for a chat on December 4. For those who missed the verbal exchange on air, here are some of the unedited highlights:

Gusi on his YouTube outburst against the People's Champ:
"I'm a man of international peace and I have never been into trouble in the country and into the youth of the Filipino people that's why I'd like to correct the accusation of the youth had against me. Let me clarify I'm not angry at Manny Pacquiao."

Gusi on Carlo J. Caparas' Gusi Peace Prize win in 2006:
"Carlo Caparas is not even a graduate of Grade 6, but he can write English, he can speak English, he can direct a movie, and he is a very humanitarian person, and he is deemed as a hero of comics in the Philippines. Imagine a Grade 5 who were able to direct a movie, who were able to involve themselves into the charity in the country. That is great enough to be a Gusi Peace Prize for art."

Gusi on the prize awarded to laureates:
"The plaque of appreciation which is made from Germany, a very beautiful plaque signed by the President, the chairman of the board of the Gusi Peace Prize, and the president of the Gusi Peace Prize and the dignity around the world non-stop publicity that you are a hero or heroine of peace world wide and of course to be in line with those most distinguished and prominent people from all over the world who are truly achievers and peacemakers."

SPOT.ph compares the Nobel Peace Prize and its "Asian equivalent," the Gusi Peace Prize, based on research as well as Gusi's statements:

Gusi explained that the awards, which were named after his father, Capt. Gemeniano Gusi, a guerilla leader during the Japanese occupation, are a means to promote the Philippines to the rest of the world. He also stated that every time the foreign awardees come to the country at their own expense, it not only boosts tourism but our economy as well. Gusi hopes that the Filipino youth will support the awards and help out in the several charity projects his foundation has started in rural areas in the country.

Learn more about the awards and the foundation at the Gusi Peace Prize Foundation's official website.