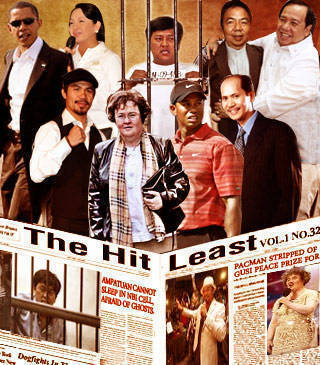 1. AMPATUAN CANNOT SLEEP IN NBI CELL, AFRAID OF GHOSTS. With all those massacre victims, that's got to be one crowded cell.

2. PACMAN STRIPPED OF GUSI PEACE PRIZE FOR BEING A NO-SHOW. The Gusi Peace Prize sounds like one of those raffle prizes at office Christmas parties–you can't win one unless you're around.

3. EBDANE BACKS OUT OF PRESIDENTIAL RACE, CITES LACK OF MACHINERY.
How about a lack of credibility, buster?

4. GLORIA DECIDES TO RUN FOR CONGRESS. Gloria intends to stay on her seat of power the way I sit on the toilet when I get the latest issue of Vanity Fair.

5. 99 CANDIDATES FILE CERTIFICATES OF CANDIDACY FOR PRESIDENT. It's a good thing we're an overpopulated country. If we were New Zealand, everybody would be running for President and only sheep would be voting.

6. RICHARD GORDON AND BAYANI FERNANDO TEAM UP FOR PREXY-VP RACES. Hope and vision are good and all…but maybe what we need as a country are father figures who can give us a good kick in the ass.

7. "TRANSGRESSIONS" AND TWO ALLEGED MISTRESSES SURFACE AFTER TIGER WOODS CRASHES CAR INTO HYDRANT AND TREE. If all our secrets could be revealed after one vehicular accident, I think we'd all be better drivers.

8. SUSAN BOYLE'S DEBUT ALBUM BREAKS SALES RECORDS, OUTPERFORMS RELEASES FROM RIHANNA, LADY GAGA, AND ADAM LAMBERT. For their next albums, Rihanna will get a neighborhood salon perm, Lady GaGa will start focusing on frumpy coats and dusters, and Adam Lambert will come back as a middle-aged woman.

9. DEATH THREATS TO OBAMA HAVE RISEN 400%. You have to understand that change can be shocking–after all, Obama is the country's first attractive President in eight years.

10. BRIDE AND GROOM UPDATE RELATIONSHIP STATUS IN FACEBOOK DURING WEDDING. That's going to be one boring honeymoon.