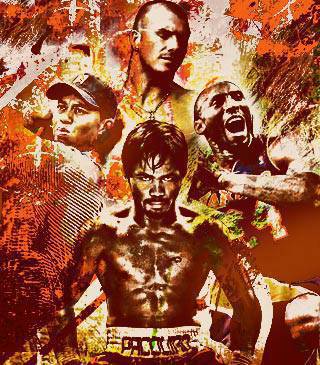 Allegedly caught cheating outside the arena, these athletes seem to be "players" in the true sense of the word.

Remember the saying that cheaters never prosper? These 10 successful sportsmen have unfortunately shown that there can be a loophole to that rule, if you've got good game.

TIGER WOODS
The golfer: Earning an estimated $110 million from his endorsements and winnings, Woods was declared the highest-paid athlete in 2008. The feat is not surprising, considering that he's the youngest golfer to achieve a career grand slam and the fastest to win 50 tournaments on tour.

The extracurricular workout: When he said Just Do It, we guess he really meant it…with (at least) two other women and eight more surfacing as of December 7. Woods is the latest sportsman to be hit with this kind of scandal, and we doubt that even his calculated swings can get him out of this sandpit that easily.

MANNY PACQUIAO
The boxer: Dubbed as the People's Champ, Manny Pacquiao has become an icon of hope in the country. With thousands of fans scattered worldwide, he already holds seven title belts, something that has never been accomplished by any other boxer in history.

The extracurricular workout: First there was Ara Mina, and now there's Krista. Although none of these accusations have been proven true, it seems that the People's Champ will always have a brothel of women attached to his name. We just hope Jinkee's planning on sharpening her own knock-out skills, too.

DONDON HONTIVEROS
The baller: This Cebuano hot shot had a rough start to his professional basketball career, with a personal injury and drafting issues blocking his way. It wasn't until he got absorbed into the roster of the San Miguel Beermen that he finally scored a place in the spotlight.

The extracurricular workout: Even though pushed by the showbiz media to 'fess up about his reported relationship with Valerie Concepcion early this summer, this six-foot-two shooting guard kept mum, probably because of the woman and child waiting for him in the sidelines. Hontiveros has said, though, that he's "not legally married."

ALEX RODRIGUEZ
The baseball player: Rodriguez is the highest paid baseball player of all-time with a hefty salary of $275 million to play with the Yankees for 10 years. The fee is relatively fair given the fact that he's the youngest baseball player in history to ever hit 500 homeruns.

The extracurricular workout: Rodriguez had already been reported to have slept with a hairdresser, an exotic dancer, and a slew of high-class call-girls since his marriage in 2002. But it wasn't until 2008 that his wife Cynthia left him supposedly because of his alleged affair with pop legend Madonna, who was also going through a divorce at the time. He's recently been linked to Kate Hudson.

The wrestler: It's amazing how this 56-year-old still has the muscle to beat his opponents into submission. Fans swarmed to see him clobber other guys in the ring (and in some very atrocious flicks) in the early '90s, but now we think they flock to stadiums just to see if he's going to break a hip.

The extracurricular workout: Maybe it was a bout of midlife crisis that sent him chasing for some action, but we're still completely repulsed by the idea that he slept with his daughter's best friend. What was she thinking? That's like sleeping with your grandfather on steroids.

KOBE BRYANT
The baller: Being drafted into the NBA straight from high school made Bryant an instant star. His team-up with Shaq during his early years in the Lakers led them to win three consecutive championships from '00 to '02. He led this year's championship all by himself, making him 2009's Finals MVP.

The extracurricular workout: With Jordan finally out of the spotlight, Bryant was next in line for basketball supremacy. His rise to endorsement heaven was cut short when sexual assault charges and an adulterous revelation drove him and his wife into a much publicized NBA scandal.

JAMES YAP
The baller: Once a hard-court heartthrob of the UE Red Warriors, Yap has successfully forayed into the world of professional basketball, becoming the star player of the Purefoods Tender Juicy Giants and the MVP in the '05 to '06 season of the PBA.

The extracurricular workout: An alleged "special procedure" administered within the private rooms of a Belo clinic ultimately made his wife, Kris Aquino, swear off both Hope and the famous doctor herself.

DAVID BECKHAM
The soccer player: Nobody can bend it like Beckham. His unpredictable moves on the field, not to mention his metrosexual flare, made him an instant icon of the soccer world. Though he almost nabbed the FIFA World Player of the year award twice, Beckham opted out of Madrid and now plays as a midfielder for both LA and Milan.

The extracurricular workout: Nothing substantial ever got pinned to this bloke even if several dubious UK tabloids repeatedly reported alleged trysts with random women. Guess that's not surprising when you're married to a former Spice Girl.

LANCE ARMSTRONG
The cyclist: The fastest man on wheels, Armstrong has become the only person to get seven consecutive Tour de France wins. His victories, including his triumph over cancer, has made him an icon for both cycling enthusiasts and cancer survivors world wide.

The extracurricular workout: It wasn't the drug use claims that supposedly ended his marriage with his wife Kristin, but a rumored affair with another woman. Although the allegations have not been proven, we're just curious about how he could have managed to juggle a wife and a secret lover with only one testicle.

MAGIC JOHNSON
The baller: Having been in and out of the league three times, with three MVP titles, and a gold medal from the Olympics, Johnson has proven himself worthy of being inducted as one the 50 best NBA players in history.

The extracurricular workout: Being a hard-court superstar in his early years may have led Johnson to believe that he could have as many extramarital one-night-stands as he wanted. In 1991, he was diagnosed with HIV, proving that payback is, indeed, a bitch.