Erap says it's OK if children of priests pursue the priesthood + more lowlights
Loading
Already a member? Log in
No account yet? Create Account
Spot.ph is your one-stop urban lifestyle guide to the best of Manila. 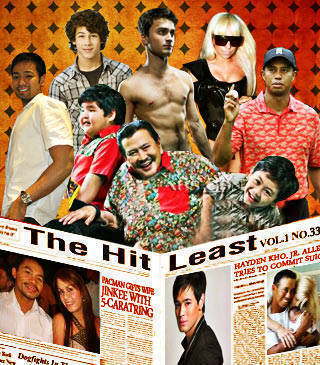 1. MORE WOMEN CLAIMING LINKS TO TIGER WOODS COME OUT IN THE MEDIA. I hear they're singing a new Christmas carol over at the Woods house: "12 Days of Cocktail Waitresses."

3. DANIEL RADCLIFFE TO APPEAR NUDE IN LAST TWO HARRY POTTER MOVIES. I'm not cracking any jokes about Harry's wand…but when J.K. Rowling conceived of The Deathly Hallows as the climax of the saga, I'm betting this is not what she had in mind.

4. U.S. TRANSPORTATION SECURITY ADMINISTRATION POSTS MANUAL ONLINE. It's like The Joy of Cooking…only for terrorists.


5. CLIMATE CHANGE SUMMIT KICKS OFF IN COPENHAGEN. If we want world leaders to take global warming seriously, they should be discussing it in Manila in the middle of April…not in Scandinavia in December.

6. LADY GAGA MEETS THE QUEEN. The only way gay men could be more excited is if the boys of Twilight mud-wrestled the boys of Gossip Girl.

7. NICK JONAS TO GO ON SOLO TOUR, INSISTS BROTHERS ARE "SUPPORTIVE". Of course they should be supportive. After all, things turned out spectacular for everybody else in N'Sync and Destiny's Child.

10. PACMAN GIFTS WIFE JINKEE WITH 5-CARAT RING. Meanwhile, Tiger agrees to pay his wife millions to stay with him. Maybe you should have held out for more, Jinkee.