Police factor in a lit cigarette as a possible cause of the explosion (Source: GMANews.TV)

Police suspect that a can of paint thinner may have caused the blast that killed businessman Remigio Ang at noon on December 15, reports The Philippine Star. The can was found in the Civic's backseat, leading the Scene of the Crime Operatives (SOCO) to speculate that the explosion was caused by spontaneous combustion, adds the Business Mirror. Although theories about a possible cigarette ignition have been circulating in various blogs, none of them have been formally confirmed.

Noemi Nullay, Ang's household help, said that her boss went out at around 9 a.m. to buy groceries at the Landmark in Makati. The car exploded as Ang drove in through the condominium gate at around 12:15 p.m., adds The Philippine Star.

"We have ruled out [a] bomb explosion," said City Police Chief Senior Superintendent Camilo Casolan, adding "...There [are] no lacerations on the body of the victim caused by sharpnel or high-velocity materials consequent to bomb explosions." His statement was backed up by the initial findings of the Explosives and Ordinance Team in Taguig, reports the Inquirer.

Chief Superintendent Leonardo Espina has identified the Serendra car blast casualty as Remigio Ang, whose wife owns one of the stores at Serendra, reports ANC. Unlike previous claims, the victim was said to be alone when he was burned alive inside his Honda Civic (with plate number TMN-865). Espina said that the SOCO team is still investigating the true cause of the explosion.

Jorge Marco of Ayala Land speculates that electrical damage might have been the reason for the blast, according to ANC. Marco went on to reassure the public that the explosion did not cause any damage to the nearby Fully Booked store.

Photos taken by blogger Judd Sta. Maria show a wrecked black Honda being hosed down with fire extinguishers by security personnel. The car was passing 11th Avenue, right in front of Fully Booked, Bonifacio High Street, before it caught on fire according to Taguig Police's PO3 Dex Cabrera. 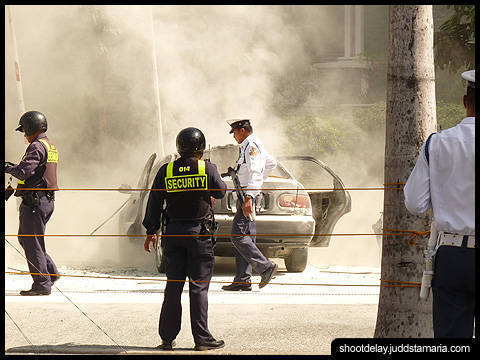 Ayala Land's Jeorge Marco says that the blast happened at around 12:20 p.m. So far, the wreckage affecting a Serendra unit owner has been contained by security enforcers who have asked bystanders to evacuate the area. One of the car's passengers has been confirmed dead while the other is seriously injured, according to ANC. 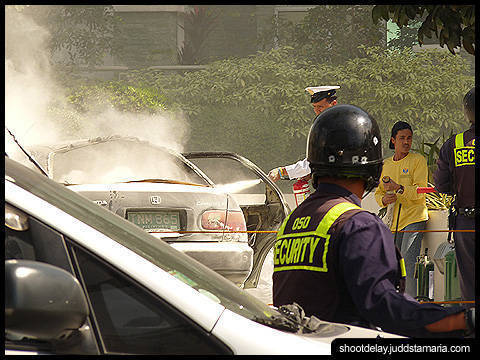 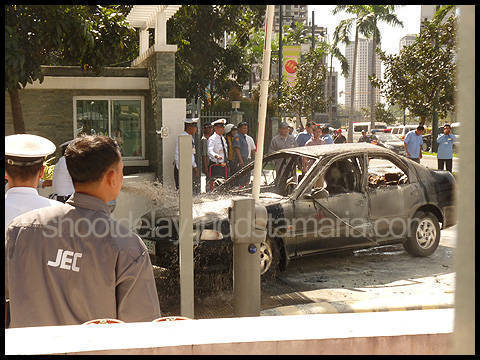 Although recent Tweets have cited the explosion was caused by a car bomb, the true reason has not yet been confirmed.

All photos taken from juddstamaria.com