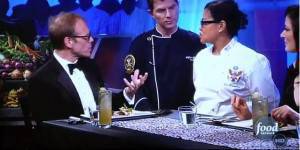 In the January 3 episode of America's most popular cooking show, the "secret ingredient" was the newly-planted White House Garden, presented by First Lady Michelle Obama, reports CBS News. The catch? The competing chefs had to dig out the fresh vegetables themselves.

For their winning menu, Comerford and Flay created   "a fennel and apple salad with oyster, another salad with lobster and squid, a Filipino-inspired broccoli clam chowder, a barbequed veggie dish, and a meringue sweet potato tart. Flay said, 'I told her don't be afraid to use her Filipino background, which have a lot of flavors there,'" according to ABS-CBN News.

Chef Comerford is the White House's first Asian-American and first female Executive Chef, a position which she has held since 2005. She is a Food Technology graduate of UP and grew up in Sampaloc, Manila.

Here's the preview of the show:

And here's where their winning dishes are rated by the judges:

Read more about Chef Comerford in our Spot.ph stories Hail to the Chef and   25 Non-Dubious Achievements.

Screen capture photo above from You Tube.

Cristeta Comerford Iron Chef
Your Guide to Thriving in This Strange New World
Staying
In? What to watch, what to eat, and where to shop from home
OR
Heading
Out? What you need to know to stay safe when heading out