Gibo ad musical scorer Dennis Garcia speaks up on "Posible" fiasco with Rico Blanco
Loading
Already a member? Log in
No account yet? Create Account
Spot.ph is your one-stop urban lifestyle guide to the best of Manila.

Veteran songwriter Dennis Garcia, musical scorer for the latest Gilberto Teodoro ad, aired his side of the controversial copyright dispute that continues to plague the former Defense Secretary's Presidential campaign.

On his Facebook page, Garcia, one of the founders of '70s band, Hotdog, defended his actions, stating that there was no instance of bad faith when he selected the Rivermaya song, "Posible," for the ad. "I chose a gem I heard extensively during the SEA Games in Manila a few years back," Garcia explained, "I recorded the tune with the intention of staying faithful to the inspiring spirit of the song--with just one, solitary lyric change... 'Gibo' instead of 'Laban.'"

The ad first aired on January 4. The following day, singer-songwriter Rico Blanco raised the issue on Twitter. He was apparently not informed about the use of "Posible," a song which he co-wrote in 2005, and posted tweet after tweet regarding the matter. 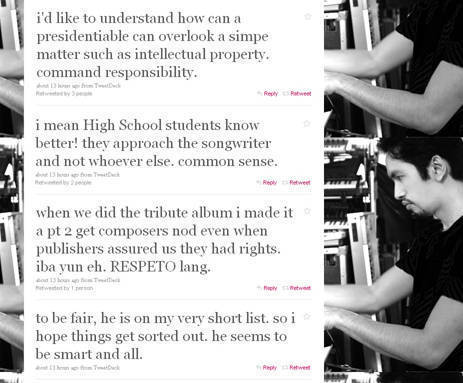 Some of Blanco's tweets on January 5

One of the tweets read: ATTENTION PEOPLE IF YOU WANT TO USE ANY OF MY COMPOSITIONS TALK TO ME DIRECTLY. i will point you to the proper publishers if any. (1ricoblanco)

But according Garcia, he did approach the proper publisher–Rivermaya's former manager, Lizza Nakpil. Garcia said that both he and Nakpil settled on an agreement, making the song eligible for use. He posted a copy of the documents on his Facebook page as proof. 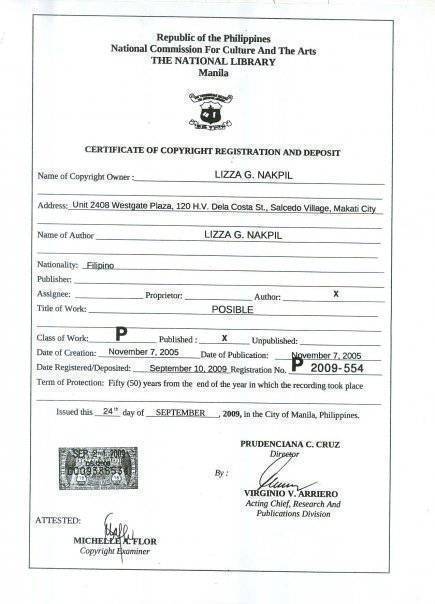 Apparently, Garcia was oblivious to the on-going dispute between Blanco and Nakpil over the rights of certain Rivermaya songs. After checking with the National Library's Copyright Office, the Philippine Entertainment Portal (PEP) reported that Nakpil was the certified owner of "Posible," making the use of the song in the Gibo ad, legal.

It came as a surprise to Garcia and Teodoro's campaign team when Warner Music, Blanco's current label, released a cease and desist request on January 8 to stop airing the said ad, reports PEP. The request has yet to be enforced since the ad is still airing.

Garcia questioned this move on Facebook, asking what possible motives Warner had for doing so. He continued by writing, "Why penalize a diehard supporter of OPM? Why so many press releases? Why target Gibo ruthlessly?"

While Garcia said that he and Blanco have cleared the air through text messages, it appears that he still wants a public apology from Blanco and Warner Music. Garcia also stated that he intends to file a case against Warner for using lyrics to his own original compositions, "O Lumapit Ka" and "Ikaw Pa Rin," without his permission. He ended by quipping, "Hey guys practice what you preach."

SPOT.ph wants to know your take on this issue. Does Rico Blanco need to apologize? Did these series of events affect your views of Gibo Teodoro?

Rico Blanco Gibo Posible Dennis Garcia Lizza Nakpil
Your Guide to Thriving in This Strange New World
Staying
In? What to watch, what to eat, and where to shop from home
OR
Heading
Out? What you need to know to stay safe when heading out