Pinay is 1st runner-up in Supermodel of the World 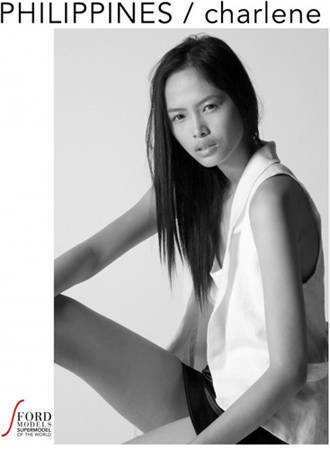 Charlene "Chat" Almarvez, a 16-year-old model from Laguna, beat more than 30 contestants and won first runner-up in the recently concluded Ford Models' Supermodel of the World. Aside from winning a US $150,000 exclusive contract with Ford New York, Almarvez will also appear in Fashion Week Fall next month.

Almarvez endured five days full of photo tests, walking lessons and interviews with some shopping and samba on the side at Sao Paulo, Brazil. She competed with models from Canada, France, Venezuela, Mexico, Australia, Kenya, Sweden, Bulgaria, Spain, United Kingdom, USA and Slovenia, among others. Karlina of Latvia won first place, followed by Almarvez, then Isabelle of Sweden, Olivia of the USA, Maryna of Belarus, Grace of Australia and Bruna of Brazil.

Ford Supermodel of the World 2010

In the Ford Supermodel of the World Philippines search in October, Almarvez beat nine other Pinay models, including former Binibining Pilipinas-World 2008 Janina San Miguel who was part of the top three. (San Miguel, known for her question and answer portion blunder, resigned from her post in 2008 because of "undue stress" caused by the death of her grandfather.) Former Ford Models CEO Katie Ford headed the panel of judges.

Ford Supermodel of the World Philippines

Almarvez stands at 5Ã¢âÂ‚¬Â²9 1/2"   and studies business administration at the De La Salle-College of Saint Benilde, reports Manila Standard Today. She was one of the muses in a Flores de Mayo parade last year where she was spotted by fashion director Cata Figueroa, who later trained her. Born to police officer Taddeus Almarvez and contractor Leah Alagon on January 25, 1993, the fast-rising model was a majorette in high school.

Photo from Supermodel of the World.

Model Search
Your Guide to Thriving in This Strange New World
Staying
In? What to watch, what to eat, and where to shop from home
OR
Heading
Out? What you need to know to stay safe when heading out