Another Pinoy is up for an international award and he needs Pinoy voting power as well. Oliver Tolentino, the first Philippine-based designer to expand in the United States, is one of the 10 finalists in the Oscars Designer Challenge, reports Inquirer.net.

The winning designer's gown, to be announced on the Oscar pre-show, will be worn on the live telecast of the Oscars, formally known as the Academy Awards, on March 7. The winner will also attend the awards show. All 10 entries will be unveiled on February 23 at the Academy building in Beverly Hills; voting begins after the video clips of the designers are posted on the Academy's website.

"I was very surprised to receive the Academy's call because it was after the day they said they would notify the finalists," Tolentino told Inquirer.net. "The deadline day was also my birthday, so while I was having a lovely dinner out, I couldn't help thinking about the contest. I'd accepted that I didn't make it [so] of course I was thrilled!"

The Bataan-born designer said, "I know people always say this, especially at the Oscars, but just to be selected as one of the 10 designers from all across the United States after opening my boutique only seven months ago, I already feel like I've won so much."

"Of course, I'd be so honored to win, but more because a Filipino would be winning. But all of that will be up to the public to vote. I hope my kababayans will support me by voting if they are proud of my gown," he added.

Tolentino described his entry as "a piña mermaid gown, the skirt accented with hand-cut abaca and piña rosettes, individually hand-stitched. The bodice is draped with silk piña and embellished with Philippine fresh water pearls."

Piña is his signature fabric, he told The Fashion Patrol at his spring-summer collection show at the Downtown Los Angeles Fashion Week on October 2009 where the audience gave him a standing ovation. "I want to promote the Filipino fabric so I'm using pineapple fiber… I'm a Filipino, why not use the Filipino fabric?" It was this hit spring-summer collection, along with the design sketch he submitted, that became the basis for his nomination as a finalist in the Oscars Designer Challenge.

"I am really trying to promote our native fabrics wherever I go. It promotes an entire industry of so many talented, skilled workers. I feel it's my duty, but fortunately, it's also my pleasure and honor to work with piña. I love it and I love seeing the reaction of Westerners when I tell them that piña is pineapple fiber. They are in awe when they hear that and see what elegant gowns can be made from it. It makes me so proud," he said. 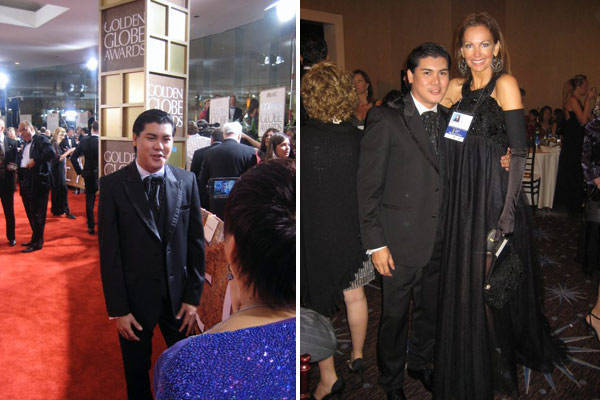 (Left) Oliver is interviewed on the red carpet at the 2010 Golden Globe Awards, and (right) with former Miss Universe Margaret Gardiner, a member of the Hollywood Foreign Press Association, wearing one of his gowns.

The Oscars isn't Tolentino's first foray into the Hollywood awards scene. In last month's Screen Actor Guild Awards, Pinay actress Giselle Tongi wore Tolentino's purple chiffon draped gown accented with Swarovski crystals. "G called me the next morning to tell me that Kate Hudson had asked her who made her gown. Also, Tia Carrere gave G her card to give to me, she was so impressed. Having those reactions always makes a designer feel good!" Tolentino said. 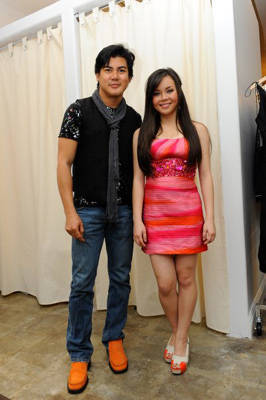 Oliver with actress Anna Maria Perez de Tagle (of "Fame" and "Camp Rock") in the dress she wore to the VH1 Divas 2009 Awards show.
ADVERTISEMENT - CONTINUE READING BELOW