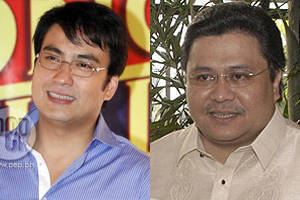 The survey, administered last January 22 to 26, ranked the possible twelve senatorial elects based on face-to-face interviews with a sample size of 1,800 eligible voters. In third place is Sen. Pia Cayetano, followed closely by Senate President Franklin Drilon. The results also show that Sen. Miriam Defensor-Santiago experienced the biggest drop in the polls compared to the December tally, from 3rd to 5th place. According to Pulse Asia, this might be due to the use of the sample ballot.

In an interview with Manila Bulletin, Sen. Revilla stated that "Ang Panday" might have increased his popularity with the voters. The senator starred as the title character of the said movie which bagged the top prize in last year's Metro Manila Film Festival. At that time, he was proposing a one Hollywood movie per month limit in support of local films.

According to the Bulletin, the senator also attributed his good ratings to his clean record saying, "I don't engage in graft and corruption so that helped as well."

Here is the list of candidates together with their voter preference percentage as complied by the Philippine Star:

Pulse Asia reported that the biggest improvements were the ratings of Sen. Lito Lapid who is up by 6.6% and Rep. Risa Hontiveros-Baraquel by 6.2%, making her current rating 11%.

Sen. Miriam Defensor-Santiago warned the Philippine Star that surveys could lead to possible trending saying, "The question can be phrased in such a way as to lead a respondent to a certain result… If no significant events occurred concerning a certain candidate, but that candidate rises or falls in the polls, then it would appear that there is no basis for the results announced." She urged watchdogs to be more vigilant while these surveys are being conducted.