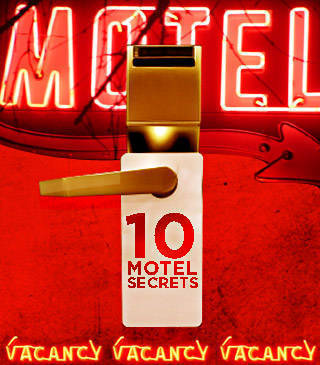 SPOT.ph went undercover to get down and dirty on Manila's motels.

They usually come in clusters of two or three on one street, with bright neon signs, long driveways, and high walls, and if you've never been in one, you're probably curious about what goes on inside.

Do motels have room service? SPOT.ph did some snooping and ended up uncovering some intriguing motel myths:

MYTH #1: Motels are busiest late at night and in the wee hours of the morning.

Contrary to popular belief, most motels' peak hours are not late at night. In fact, most people check into motels between   9 a.m. and   10 p.m. Once it's past 10 in the evening, the number of check-ins dwindle.

Most motels' busiest hours are during lunch time for the infamous "Secretary Special," now more commonly termed as "OB (Official Business)." From 11 a.m. to 1p.m., business people ranging from managers, employees, and clients check in and spend their lunch hours conducting their "special business meetings" in the privacy of their work-conducive motel rooms.

If ageing men still had the stamina of bulls, then there would be no need for Arthro or Viagra. Sadly, grandpa's libido isn't as impressive as it was in the swinging '60s. According to our unnamed sources, most of the patrons who go in and out of their hallowed halls are between 20 and 30 years old. Of course, that doesn't completely discount the old-timers. Some granddaddies still drop in from time to time.

MYTH # 3: Motels only allow one couple to check in per motel suite.

This myth is a tricky one, since the policy changes from one establishment to another. At some motels, two people of the same sex cannot share a room. But what most motels have in common is a two-person-per-room policy. If more than two people show up at the front desk, they would have to pay for the corresponding number of rooms, depending on how many they are. In the case of three people, for example, they would have to pay for two rooms   even if they're planning to use just one.

One exception: When a family checks into a motel (which happens frequently, by the way) they are given a special family suite strategically situated a certain distance from the couples' suites.

Although it is true that motels have special menus readily available in each suite for food and amenities, none of them include special offers involving the infamous "extra service." Motel managers usually emphasize that their establishments are not brothels, and that they do not condone any form of in-house prostitution.

MYTH #5: Fire escapes are placed near motel bathrooms for a quick means of escape in case of the appearance of angry spouses or police raids.

Popularized by Pinoy B-movies, motel fire escapes have become the famous getaway routes for guilty men and their mistresses. But according to motel staff, the fire escapes are positioned accordingly depending on the motels' building codes. It has been policy for most motels to place a fire escape outside each room, not for the purpose of a quick escape for their patrons, but for legitimate emergencies.

The motel staff also make use of these fire escapes to check up on guests who do not respond to a knock on the door or a phone call at check-out time.

According to motel staff, their suites are actually comparable to any other hotel (yes, the ones spelled with a   letter 'H'). Most of their standard rooms provide the same amenities such as cable TV, tables (yes, they listed tables under amenities), soap, and towels. If guests have any special requests, say the addition of contraptions like swings and chains in the rooms, the management usually just offers   room upgrades. Their most popular rooms are the ones with hot tubs.

Our sources explained that very few motels can actually cater to their patrons' special room requests, and they come with a hefty price tag. High-end motels such as Victoria Court offer rooms like the X-Men Suite, Austin Powers Suite, and Moulin Rouge Suite, which provide a different experience for their patrons with their quirky and stylish fantasy set-ups.

A hand-painted sign promoting "world-class cuisine" doesn't exactly inspire much confidence, but after a first-hand taste, we can honestly say that motel food can actually be pretty tasty. An insider tip suggests that the true test of a motel's menu is their pancit canton, and apparently every motel would claim that theirs is the best, so that's probably the smartest choice if you ever find yourself having to decide on something from a motel menu.

Notoriously known as the "mistress dates," it has been commonly assumed that motels would be swarmed during the days that precede and follow Valentine's Day and Christmas Day. Not so. For reasons unknown, most motels usually experience a slump during Valentine season. As for Christmas, there is actually a spike in the number of guests from December 20 all the way until New Year's Day, with their busiest flow of guests on December 25.

TV-wise, most motels are apparently porn-free.   Only the standard networks and the usual cable channels are available since, as they like to emphasize, they only provide the same services and amenities that you'd find at a hotel.

Obviously, the motels would deny this urban myth, but we asked anyway. Aside from it being in direct violation of their patrons' right to privacy and a serious criminal offense, they claim that they wouldn't install hidden cameras or one-way mirrors because they want to be establishments that people can trust. As a result, they insist that the only cameras present in motels are the security cameras located at the reception area, while mirrored rooms have normal mirrors. Any rumors about hidden cameras or one-way mirrors would ruin a motel's reputation, and they do want repeat business, after all.

Valentines Day Motels
Your Guide to Thriving in This Strange New World
Staying
In? What to watch, what to eat, and where to shop from home
OR
Heading
Out? What you need to know to stay safe when heading out