US safari site promotes rare trophy hunting in Mindoro, PAWB says wildlife hunting is illegal
Loading
Already a member? Log in
No account yet? Create Account
Spot.ph is your one-stop urban lifestyle guide to the best of Manila.

"Our attention has been called by an advertisement, "trophy hunting in the remote jungles of the Philippines", in the web site http://www.adventures411.com/philippine_trophy_hunts.html"

"We would like to categorically state that wildlife hunting in the Philippines is prohibited. The activity being promoted in the said web site is illegal!"

"We are therefore advising the general public, especially the foreign visitors/nationals not to engage in any transaction with http://www.adventures411.com/philippine_trophy_hunts.html involving wildlife hunting in the country."

"Any person who will be found hunting in any part of the Philippines will be dealt with the full force of republic act 9147 (wildlife resources conservation and protection act) and other relevant laws!"

The advisory was signed by Antonio c. Manila OIC, Assistant Director-In-Charge of the Office of the Director.

Adventures411.com, a website based in Montana in the US offers a 14-day trophy hunting tour in Mindoro, reports Dateline Philippines. This webpage dedicated to the Philippine safari shows photos of Caucasian hunters and their Filipino guides posing together with their slayed trophies. One prominent photo shows a hunter named Michael Valencia together with his 15 1/4" record-holding Philippine Bearded Warty Pig. 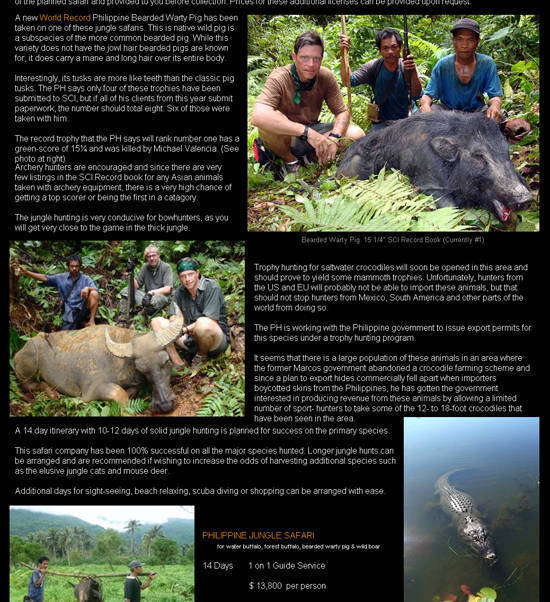 The site says, "With China still closed to trophy hunters, these Philippine jungle safaris offer the only real opportunity today to collect some of these unique Asian species. Nowhere else can a hunter collect the number of rare native Asiatic trophies on a single safari. A jungle hunter here usually can collect 5-6 trophy species on a 20 day extended safari." 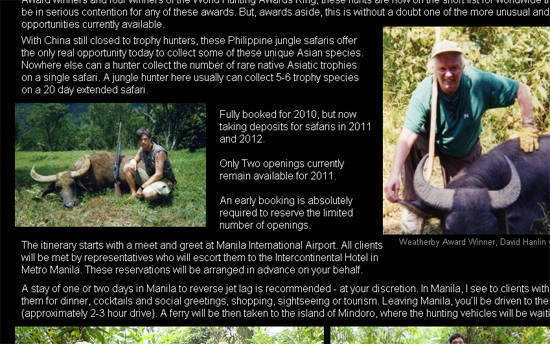 PETA (People for the Ethical Treatment of Animals) Asia Pacific issued a statement to SPOT.ph regarding the matter: "The Animal Welfare Act leaves the issue of hunting a bit vague stating that only a few animals can be killed in the Philippines–it does not address hunting specifically nor the species of animals advertised on the 411 Web site. However, a chapter from the Wildlife Resources Conservation and Protection Act (R.A. 9147) states that "collecting, hunting or possessing wildlife, their by-products and derivatives…" is unlawful."

"We oppose all hunting because of the suffering that it causes animals. The stress that hunted animals suffer–the inescapable noise, fear, and commotion–severely compromises their normal eating habits, making it hard for them to store the fat and energy that they need to survive... Hunting also disrupts migration and hibernation patterns and destroys families. For some animals who mate for life and live in close-knit family units, hunting can devastate entire communities."

Adventure411.com's webpage featuring the Philippine hunts has since been taken down from the site. According to PETA, this is a good sign. PETA told SPOT.ph that they will be doing more research on the issue and will post updates in due time.

Peta Mindoro Hunting Denr Advisory
Your Guide to Thriving in This Strange New World
Staying
In? What to watch, what to eat, and where to shop from home
OR
Heading
Out? What you need to know to stay safe when heading out