Mayweather reportedly said: "Personally, I think Pacquiao got exposed in that fight for being one-dimensional. You can have all [the] offence ability in the world but with no defense you're not going to last long against a good counter puncher such as myself. Look at the way Clottey was getting through, each time he threw something it landed. Then at the end Pacquiao's was all busted up, when's the last time you've seen my face all messed up like that? That's the difference between an amateur and a true pound for pound boxer."

Mayweather, whose planned bout with the People's Champ fell through after drug-test disputes, allegedly said that the Pacquiao-Clottey match was boring. "[Pacquiao] was punching his arms for all 12 rounds. At least when you watch Floyd Mayweather, you know you'll be seeing non-stop action for 30 minutes straight and that's what you'll see on May 1st."

But according to Boxingscene.com, the Mayweather interview released by major publications worldwide earlier this week was a hoax. Two members from Mayweather's camp told Boxingscene's Rick Reno that the statements were 100% fabricated saying, "Floyd didn't do any interviews. Floyd has not watched the fight yet." 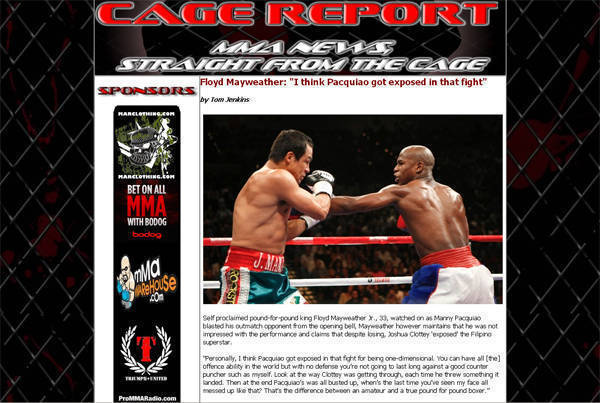 The interview used   by   Inquirer Sports was taken from Cagereport.net, a site which was recently taken down for construction. A cached version of the page shows the original links of the interview traced to two blog posts from MMAXclusive.com and latestmmanewsnow.wordpress.com.

The former welterweight champion will be facing Shane Mosley in Las Vegas on May 1 at the MGM Grand in Las Vegas.