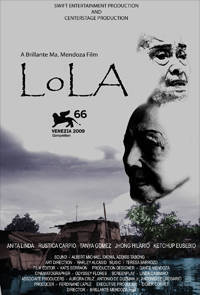 Lola nabbed the Fribourg International Film Festival's Audience Award and the Ecumenical Jury Award, which cites films that present the struggles of impoverished nations in Africa, Asia, and Latin America. Each of the these prizes came with 5,000 Swiss Francs. This means Lola took home over P400,000.

Meanwhile, the members of the International Federation of Film Societies gave Lola the Don Quijote Award, which gives it a chance to be screened at the annual International Film-Club Festival at Reggio di Calabria in Italy.

The multi-awarded film will also be shown at the Denmark, Belgium, and New York's Tribeca Film Festival this year.