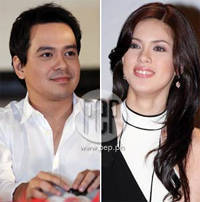 PEP.ph reports sightings of John Lloyd Cruz and Shaina Magdayao's public display of affection over the weekend at the Boracay Shangri-La Resort.

The box-office king, 26, and up-and-coming actress, 20, allegedly left for Boracay a few days ahead of their co-stars in ASAP XV who were set to tape a summer special there. According to PEP's source, Cruz and Magdayao supposedly checked into the Boracay Shangri-La Resort (also reported by the Manila Bulletin) North Wing that houses the De Luxe Rooms on March 18, Thursday. The next day, the two were allegedly seen sunbathing on the beachfront of the resort where Magdayao was very affectionate towards Cruz.

According to another PEP source, they avoided the public and only surfaced for the rehearsal and taping of ASAP XV on March 21, Sunday. The source said in Filipino, "They're sweet together. PDA [public display of affection]." Cruz and Magdayao were allegedly spotted leaving the resort on March 22, Monday.

This is not the first reported sighting of the two. On March 5, they were seen together carrying shopping bags at EDSA Shangri-La Plaza mall, according to PEP Alerts. They also shopped for bicycle parts at Sabak Sports and Adventure Store on February 6, said PEPster "shyspy" who provided photos.

Cruz was rumored to be the cause of Magdayao's breakup with her boyfriend of two years, John Prats, but Magdayao and Cruz have denied it. All three are under the same management, Star Magic. Cruz was previously linked to Ruffa Gutierrez, ten years his senior. The two were reported to have been spotted checking into the SLS Hotel in Beverly Hills, California in June 2009. Both claimed then that they were just friends. In January 2010, when Gutierrez Tweeted   "I only fight for someone who's worth it. If not...then goodbye and good riddance!" speculations were rife that she was pertaining to Cruz.

Star Magic publicist Thess Gubi, told PEP in Filipino yesterday, "Many have tried to interview [Cruz and Magdayao] but they don't want to be interviewed."

Photos by Noel Orsal of PEP.ph.